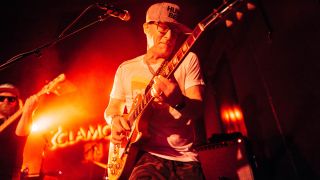 With its members having earned their stripes playing for some of the music industry’s biggest names - from Kanye West, Lady Gaga and Justin Timberlake to Stevie Wonder himself - Boston funk collective Lettuce could very well be one of the tightest groups in the world right now.

This year, the Grammy-nominated groovers return with seventh full-length Resonate, a record that delves deep into the very essence of the jam band. The music is joyous, carefree and recursive - and at times incredibly psychedelic - fusing elements of soul, hip-hop and jazz into a wide yet reassuringly familiar and honest approach to modern funk.

For a genre that’s come in and out of fashion arguably more than most, it’s a record that expertly harnesses the power of loops, stabs and syncopation in a way that feels cutting and contemporary…

“I’ve been reading Guitar World since I was 13 years old and I’m about to turn 45,” says guitarist Adam “Shmeeans” Smirnoff.

“So this is a really, really big deal. It means a lot to me. I just needed to let you know that, man. Especially as a funk player. It feels like it’s a good time for funk right now - there are a lot of a really good bands out there. I guess the era of hip-hop brought back funk music in so many ways - they used a lot of those samples. Hip-hop is huge right now, so maybe it goes hand-in-hand.”

Perhaps one of the more notable aspects of Smirnoff’s approach is that he’s generally seen playing a Gibson Les Paul instead of the slinky single-coil Fenders the genre is most associated with. When this Guitar World writer mentions Smirnoff’s number one looks like a lot like his own VOS '58, the Lettuce six-stringer laughs...

“You’re so close… it’s a VOS '60! It’s interesting - I started out as more of a Fender player. I still have my 1974 Strat, which I still record with and play out with sometimes. It’s difficult for me to do with Lettuce now because I’ve formed the identity of the Les Paul for some of the songs and sounds that are happening. I’m very influenced by that kind of tone, mainly from Bruce Conte from Tower Of Power who also played a Les Paul and found an in-between sound.

"It had that high-end at the top, yet it’s got some body to it and you can use it as a soloist as well. I think when I became the only guitar player in the band, I fell in love with that sound to fill up a little more space. I haven’t done anything to my '60. I’m not really a tech-y dude when it comes to modifying guitars or anything like that.”

What other players do you think have influenced your approach to guitar?

“I would have to say Catfish Collins and Jimmy Nolan, who were both in the James Brown band during different eras - Catfish went on to be in Bootsy’s Rubber Band. Another big one is Leo Nocentelli from The Meters. I think he’s one of the funkiest and most creative guitar players of all time - I especially love what he was doing in the '70s.

"His writing is really simple and able to influence a lot of people, so in a good way. Prince is huge for me, as far as being an overall musician and also being one of the funkiest musicians of all-time. Freddie Stone, from Sly And The Family Stone, Spanky who plays with D’Angelo. Grant Green, George Benson, Larry Carlton, Jeff Beck… the list goes on and on.

"I just love guitar! There are so many different approaches I enjoy, it’s a beautiful thing anyone can carve out their own space and sound.”

How exactly do you dial in the right funk tones on a Les Paul?

“What I aim for is a nice big clean tone that fills the space and can still play on top of a big section band, where you have horn, keyboards and more. I need to lock in with everyone sonically and rhythmically.

"So it’s just a little bit of reverb, the bass set around 3 with the middle and treble pretty normal around 5 - though I might crank it on different kinds of Twins. Listen to James Brown, Maceo Parker, George Benson, John Scofield… you’ll end up with your own sound no matter what you’re aiming for. I truly believe that. You will be all the pieces of everything you’ve ever listened to.”

There’s a lot of restraint to your playing - holding back on each groove instead of trying to fight your way up...

“100%! I enjoy playing as part of a group and building the foundation of that funk pyramid. A lot of my friends think like that too, that’s why we came together as Lettuce. We had this vision of how we like to do music. I genuinely think playing with other great musicians is the best thing you can do. If you can be humble enough to be the worst musician in the room and learn from everyone around you, you’ll get better. You’ll eventually pick up naturally.

"I’m also lucky enough to have been influenced by Jeff Lockhart who teaches at Berklee School Of Music when he was playing Wally’s Cafe, where I learned so much about groove from so many incredible players.”

Tell us more about your rig - it definitely sounds like you’re a fan of modulation and ambience effects...

“It’s generally a Fender Twin. I like a big clean sound and I like the reverb on those amps too. When you get rentals, some can be okay and then some can be spectacular. Then with pedals, number one is always the tuner - you gotta stay in tune, man! I use the [TC Electronic] Polytune and then it goes into my Mu-Tron Octavider, then a Beigel Sound Lab/Mu-FX Tru-Tron Envelope Filter which is Mike Beigel’s modern version of the Mu-Tron pedal.

"Then I got into a wah, then a [Ibanez] Tube Screamer, an MXR Sugar Drive, an MXR Phase 90, then maybe a Mooer Trelicopter, which I just use for that Wu-Tang kind of tremolo. Then I have two delays - an MXR Echoplex with the tap tempo and a Carbon Copy, which is set to crazy levels of depth.

"The Echoplex is more in-tempo for solos and less of a sound effect. Fender just sent me a Jazzmaster guitar and a bunch of pedals which I’ve been sat here recording with. So I’m already writing new tunes...”

You use the wah fairly extensively across your records and live shows. Which model do you find yourself gravitating towards?

“It’s just a regular Cry Baby. It doesn’t say anything else on it - there’s no buttons, there’s no knobs. I don’t like having all the extra stuff. You travel with your 'board and keep putting it away and taking it out. I don’t want anything I can adjust; I just want it to work… and this one has always worked fine and doesn’t need any tweaking.”

Moksha is one of the more tonally exotic tracks on the new album, with some Indian influences. Where does that side of it come from?

“There’s definitely some of that John McLaughlin and Mahavishnu feel on that track. I started playing a little sitar over the last couple of years, so that kinda ended up influencing it too. My sitar teacher is actually on that track too, Inderjit Banerjee. We got back and forth, which ended up having some nice energy to it.

"I’m lucky to have all those grooves and layers in Lettuce, our drummer Adam Deitch able to give that pocket behind you, Nigel [Hall, organ/piano] playing all these great sounds and Jesus laying it down on bass. It’s the perfect place to start exploring.”

It definitely feels like you have a lot of chordal knowledge, sometimes playing inversions to suggest extensions or hint at certain flavors...

“I don’t know if I have an approach other than trying to play the most musical thing I can by listening to those around you and hearing what they’re playing. I base my decisions on that and always strive to make the most musical one. I’m definitely not a chordal master of anything like that, I will always be a student of music and looking to listen and take things from as many people as I can.

"We’re so lucky to live in a world where we can share all this information... it makes you realize just how many incredible guitar players there are in this world.

“There aren’t really any unique chords with me. I’m more focused on being extremely rhythmic and in the pocket. So I would say try to approach the guitar more as a percussionist. Have a relationship between your right hand and how you mute with your left. You can make one simple chord sound really fun and funky when you’re with other musicians. That’s what I’m aiming for.

"As far as exercises, I’d suggest making a beat or finding a drum loop and have fun with it. Try and come up with the most perfect parts you can. I think the best bit of advice I can give is don’t just be a guitar player: record, produce, write, learn more instruments whether it be bass, drums or keyboards. Even if it’s just 10 or 20 minutes a day, you can really explore new approaches and ideas.”