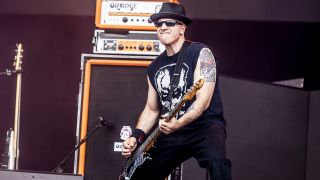 Metal scene legends Life of Agony have had a banner year, capping with the release of their latest album, The Sound of Scars, out now via Napalm Records. The band is about to head out on their upcoming co-headline tour with fellow heavy music icon Doyle, beginning March 13th in Philadelphia, PA.

In anticipation of the tour, Life of Agony bassist and illustrator Alan Robert has shared with us a very special insider’s look at his vintage Fender P-Basses, as well as photos of additional rare items from his extensive collection.

"For many years, I had been playing these neck-thru Spector Basses (USA NS) made by Stuart Spector at his Woodstock, NY shop. These are gorgeous, handcrafted instruments... true works of art. They are seriously like the Rolls-Royce of basses. I treasure them both and still use them all the time when writing at home. They play incredibly smooth and have two active EMG humbuckers.

I switched to playing vintage Fender P-Basses during the recording of our Broken Valley album for Epic Records in 2005. I was chasing a more raw and gritty sound, so producer Greg Fidelman (Metallica, Slipknot) suggested I try some vintage instruments for the recording.

"His buddy brought in several Jazz and Precision basses for me to try out. They ranged in ages, mostly '60s-'70s, but as soon as I plugged in the white 1974 Fender Precision, everyone's head turned around. This thing was an absolute beast!

"There was just something so unique and ballsy about this bass... I bought it right there on the spot. I ended up using it on every album since, including our latest The Sound Of Scars.

"Ever since that day, I have been on the hunt to track down more 1974 Fender P-Basses. There is something special about that year... I'm not sure if it's because of the wood, or the way the pickups are wound, or both, but you can just hear the difference.

"I've managed to get my hands on three more '74s over time: a sunburst, and two black ones... and as great as they all sound, the original white one I bought is still the king.

"Some friends think I'm crazy for bringing these vintage instruments out on the road, but I enjoy 'em every night on stage. And just because they're vintage, I don't go easy on them... they take a pounding! I can't tell you how many times I stage dove into the crowd with them over the years [laughs]!

"I've included some photos of some other rare instruments from my collection, including an all-original, late-'60s Hofner Beatle Bass, and a vintage '60s Vox Constellation Bass with built-in distortion switch! My friends at The Hard Rock Cafe have my black ESP on display in Cologne, Germany!"