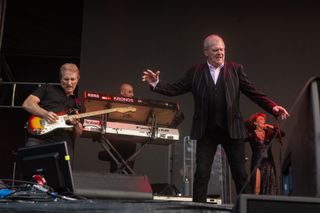 By the time we make it to the festival entry on day one, we’re already caked in sweat and dust – a prerequisite, though, for any camper making their way into Falls after setting up their “home” for the next three nights. After perusing the grounds in search of the cheapest spot slinging watermelon juice and playing a quick game of volleyball at the makeshift beach propped up between stages, we settle in on the amphitheatre hills and prepare to have our minds blown by a true blue Australian icon: John Farnham. An odd choice for a festival like Falls? Absolutely. One we still wouldn’t miss for the world? Absolutely.

Farnsey is in remarkable shape as he takes to the Valley stage at sunset, cantering through a choice slither of his catalogue – marvellous nuggets of banter scattered throughout – before closing, naturally, with his seminal pub karaoke classic “You’re The Voice” (and yes, virtually everyone in attendance screamed along). Spirits are strikingly high when Tash Sultana follows him with their 45-minute set of sprawling, snaky guitar rhythms and serendipitous synthage. They’ve come a long way from busking on the sidewalks of Melbourne, wrangling a one-person powerhouse setup of prickly psych-rock and rippling reggae with a level of might that most established virtuosos would fail to replicate.

We call it a night early to celebrate our New Year in the pavilion (which is, like every year, buzzing with liveliness and its own unique culture), and rise early on day two for a rip-roaring set from Wollongong skate-punks Totty. It’s instantly clear why they’ve captured the heart of the underground scene: their songs are short, snappy and super fun, and their easygoing stage presence is top-notch. It’s just three best mates having a jam, shooting the shit and showing off their skills – which they have a crazy amount of. They’re a perfect warm-up, too, for Canberran grunge-pop trailblazers Teen Jesus And The Jean Teasers. From the light and lively “Swimming Pool” to the crunchy and convulsive “Hallway To Norway”, the foursome hit every mark with a bullseye.

Hot off the heels of their debut album Big Grief, WAAX launch themselves upon the Forest stage with pure, incandescent fury, bursting into a biting blitzkrieg of highlights from the disc, as well as some delightfully deep cuts that send their crowd into a raging tizzy. The only other act on this bill who could muster such intensity is Yungblud, so props to the organisers for popping his set on right after the Brissy quintet’s. Dominic Harrison is an irrepressible force of manic moxie as he tears through hit after hit, stopping only to sling on and off his guitar between the setlist’s meatier tracks (which there are thankfully plenty of).

Bounding around the stage with youthful ardour and hopping at whim between keyboards, guitars and percussion, Sydney pop-rockers Holy Holy prove themselves to be the perfect comedown act as we roll into the evening. Smiles wide and energy buoyant, we’re ready to get our melancholy on with new-wave crooner luminary Lewis Capaldi. The laidback Scot breaks up his cruisy, heartstring-tugging soft-rock jams with side-splitting banter – it’s not often you see punters vacillate between belly laughs and tears a dozen times across an hour, but if anyone can make it work, it’s Capaldi.

The amphitheatre is teeming with elation for Of Monsters and Men, with the Icelandic pop-folkers coasting through a sharp and spirited set of their sprightly summer anthems. We end the night with an hour of pure, mind-melting magic from the German indie-rockers in Milky Chance. Cuts from their recent Mind The Moon LP are highlights in their calculated restraint and more cerebral noodling, but it’s older gems like the puckish “Ego” and hallucinogenic “Stolen Dance” that truly make the pits erupt.

Adrian Eagle sets the mood for our surprisingly lowkey third and final day, as the up-and-coming Adelaidian spotlights his polychromatic fusion of rootsy hip-hop and mellow pop hooks. We get a decent hit of early-arvo energy from pub-rockers Bad//Dreems, whose walloping Tele riffs, gnarling solos and bright, booming choruses make them a standout act of the festival. Their fiery stamina stands out, too, sandwiched between Eagle and the ultra chill #1 Dads. The side-project of Big Scary frontman Tom Iansek, the guitar-pop outfit revel in breezy and understated bops that burn slowly, but with a fire that hits the soul fiercely.

The rest of our day is admittedly quiet, until a loveably cool night settles in and the festival comes to a rousing close at the hands of pop kings Vampire Weekend. Between the jammy, classic rock‑channelling cuts from this year’s Father Of The Bride, the sparkly synthpop gems from 2013’s Modern Vampires and the perky pseudo-reggae scorchers of the New Yorkers’ earlier works, the hourlong set is wonderfully unpredictable and consistently exciting. Performing as a septet, their mix is layered dense with punchy and peculiar instrumentation – the guitars are the stars, though, from the intoxicating grooves of frontman Ezra Koenig’s hollowbody noodling on “Sunflower” to Brian Jones’ flamenco fretting on “Sympathy”.

Note: this review is also featured in Australian Guitar #137. Subscribe to our print edition here!