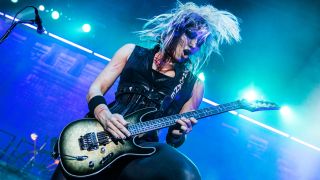 In addition to wowing fans around the world as Alice Cooper's touring guitarist and gracing the cover of Guitar World as one of the guitarists of the decade, Nita Strauss is the first female to have her own signature model Ibanez (the JIVA), including two new models that were unveiled earlier this year.

Her monstrous 2018 debut solo album, Controlled Chaos debuted at #1 on Billboards Top New Artists chart and her guitar clinics are sought out by fans and seasoned players alike.

Now the LA-based guitarist is taking her love of teaching to the next level by launching Rock Guitar Fundamentals, a three-module, online teaching program that’s suitable for guitarists of all levels.

Module One is designed for the novice player and goes over the anatomy of the guitar, including all the basics, including how to correctly hold the pick, fret notes, tuning and more.

Module Two is highly focused on technique and modal theory, approached from a rock player’s perspective to be easily understandable for the modern musician.

Whether you’re picking up the guitar for the very first time of you're an advanced player who wants to learn some shred tips and tricks, aspiring learners can jump in wherever their skill level is. Better still, purchasing the course gives users lifetime access to all future course updates.

In addition to the new course, Strauss is also hard at work on the follow-up to Controlled Chaos. In this new interview, Guitar World got the lowdown on Rock Guitar Fundamentals and much more.

What was the genesis behind Rock Guitar Fundamentals?

"I love doing my clinics and have had so many requests for lessons via Skype and in person. There was no way to fit it all into my schedule but I thought how cool it would be to put something together that took all or the knowledge I’ve accumulated over the years playing guitar and putting it into the same lesson format I learned from."

What’s do you find most rewarding about teaching?

"For me, the most rewarding thing is being able to pass along the knowledge and skills that I’ve learned. If you’re someone who has a skill or something you can pass along, I feel it’s incumbent on you to pass it to the next generation so those skills and that knowledge can live on."

How does Rock Guitar Fundamentals differ from other courses?

"Ours is the only one I’ve seen that takes the player from the very beginning to the very advanced. The first lesson literally starts out by showing you the basics of what a guitar is. It’s for people who’ve always been a fan of music and wanted to learn how to play, or someone who maybe already has a guitar but can only play a few chords. Although the majority of the course is geared toward intermediate and advanced players, I wanted to make sure that it also covers the very basics as well."

In your opinion, what’s the best guitar to start out on?

"The best first guitar is the one that feels right in your hands. I encourage people to start out with an electric guitar though, because it’s much easier to play. A lot of people are out buying their first guitar because of this course and I’ve been sending them straight over to the Ibanez Gio series. They’re great guitars that are very affordable. They’ve got good electronics and are well built with great finishes."

What’s the best bit of advice you can give to guitarists of all levels?

"Something everyone can improve on is finding your own style and personality as a guitar player. I remember the first time I heard Velvet Revolver and not knowing who they were. I was listening to a song and when the guitar solo came on I said, 'Well, I know that’s Slash.' I think having that kind of personality is something everybody can develop on their own."

What are your thoughts on how long to practice each day?

"As a young guitar player, I would often practice for hours and hours. In today’s age, not a lot people can fit that into their day. But if you’re in the beginning or intermediate portions of the course try doing one lesson and then taking fifteen to twenty minutes a day to work on what you’ve learned. Just fifteen to twenty minutes working on something new is a great way to start building your practicing habits."

What’s your recommendation for the best way to get out of the pentatonic box while soloing?

"The modes are what opened that door for me. If you’re a guitar player stuck in that box, getting into the modes will help you learn what scale positions go with what keys. So, if you’re playing A-minor pentatonic, you’ll know exactly how many frets to go up and what position the major is going to be and how to change up that scale voicing."

What are your plans for future updates of the course?

"The cool thing about Rock Guitar Fundamentals is that it’s lifetime access. That means if you get it now you’ll have access to anything new in the future. One of the first things I’d like to tackle is doing another series of videos and talking about instrument care; like how to change strings on a floating bridge. There’s a need for practical application of this kind of stuff as taught by a working guitar player."

"Now that the course is out I’m devoting my attention to the follow up to Controlled Chaos. I’ve got seven songs finished and there’s four more that I want to do. A few of the songs will feature guest vocals, which is really exciting."

What would you like people to take away from Rock Guitar Fundamentals?

"One of my reasons for putting this out is because music is therapy, and playing music is even better therapy. Whether you’re an experienced guitar player who just wants to brush up on the modes, learn sweep picking, two-handed technique, legato and whammy tricks, or if you’re just a fan who’s never picked up an instrument before and wants to learn to play some songs, I want everyone to come out of this course with a feeling of accomplishment."