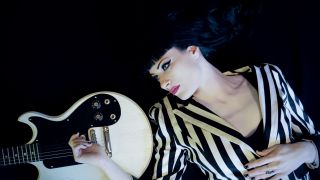 The Ronettes-Style imagery, early '60s kitsch vibe and bold colors that grace Olivia Jean’s Night Owl music video are already enough to make an odd but sticky impression on the casual listener. But throw in the hooky riffs and jolting rockabilly, surf and garage-rock feel of the disc as a whole, and you know you’ve stumbled onto something special.

Best of all, Olivia produced the album - Night Owl - herself. And although she played most of the instruments on her last disc, the Jack White-produced Bathtub Love Killings [2014], she got some help in the studio this time around (“It was way too time consuming to record everything myself. It just wasn’t practical, timewise.”)

Olivia came to White’s attention in 2009, when he heard a demo she’d handed out at a White Stripes gig. He was so impressed that he invited her to move to Nashville to become part of Black Belles, a band he put together with an image and a sound not too far from Olivia’s own work.

“It was a demo of all instrumental surf-type songs,” she says. “I actually used a couple [of the songs] on [2011’s The Black Belles] and on my first solo record. I used three more on Night Owl. I played all the instruments on those three as I wanted to stay true to the spirit of my original demo from 2009.”

Olivia - whose six-string influences include Link Wray, Brian Setzer and the Cramps’ Poison Ivy - has a gift for creating infuriatingly catchy guitar riffs, Night Owl being a prime example; in fact, the album plays like a stack of your favorite singles, one after another.

Standouts include the menacing Garage Bat, the infectious Shut Your Mouth and - perhaps best of all, Jaan Pehechaan Ho, the classic 1965 Bollywood rocker (originally recorded by Mohammed Rafi) that famously appears in Ghost World, the 2001 Terry Zwigoff film.

“Producing the record myself meant I had a lot more freedom to use all the influences that shaped me when I was younger,” she says. “I had a lot more experience, and I was more comfortable speaking my mind.

"Guitar-wise, I’m mainly using a Fender Player Series Jaguar and a Gretsch George Harrison Duo Jet into a Fender Hot Rod Deville. I always wanted to play a Gretsch 6120 like my heroes, but with the amount of dirt and distortion I use, that was never going to work.”