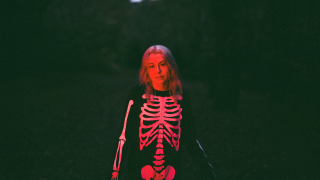 The new album by Phoebe Bridgers – Punisher, her second solo effort and fourth LP in total – simmers with a low, folky drawl that always teeters on erupting into sheer chaotic disarray, but never does; the LA indie-rocker plays with sharp and noodly guitars, buzzy and ethereal synths, and the occasional horn solo on the follow-up to 2017’s Stranger In The Alps.

But as broad and sprawling as the 11-tracker is, the energy is distinctly restrained throughout – Bridgers plays her cards incredibly close to her chest, and only offers the listener a glimpse of them on her own terms.

In the three years that separates Punisher from its predecessor, Bridgers went from being an underground luminary to a force to be reckoned with on the world’s stage. Her tunes became a favourite of those in charge of wrangling soundtracks for TV and film projects, and in addition to a whirlwind stint of solo touring, she formed two bands – Boygenius with Julien Baker and Lucy Dacus, and Better Oblivion Community Center with Conor Oberst – which both released stunning full-length records worthy of their own outpourings of acclaim.

In returning to her solo project, she’s hardly the person she was at 22, a lifetime’s worth of experience doling the now 25-year-old a musical depth those with thrice her training struggle to reach – all of which is channelled into Punisher. The end result is an album that beckons replay after replay – you need to nibble around every layer of this intricate musical trifle to truly understand how it clicks. And when it does click, it clicks hard.

Punisher is an immensely dynamic and personable record, and Bridgers is right to be as proud of it as she is. After racking our brains over each of the record’s defiantly understated, yet intensely meticulous elements, we bit the bullet and gave Bridgers a call – we simply needed to uncover some of the secrets behind this album.

How did you want this record to build upon what you established creatively with Stranger In The Alps?
I think I’ve just gotten better over time. I’m learning what I like about my own songs more. Stranger In The Alps was a collection of songs I’d written from being a teenager to being an adult, but these are all songs that I’d written over the past couple of years. I like it more, and I hope people like it more.

I like that this record is mostly slow-burning, but there are some really crucial moments where you strike a balance between levity and melancholy – like at the start of the record, sandwiching “Kyoto” between “Garden Song” and “Punisher” – and I think that leads to it having this really nice ebb and flow as it unfolds. Is that unravelling of a tracklist something you consider important when you write an album?
Yeah. I never did before – I definitely didn’t on my first album, I just had songs and thought about them all as singular. Conor Oberst sequenced my first record for me because I didn’t know where to start; I was like, “I have no idea how to do this, but you’ve done this before,” and he was like, “Okay, well this is what I think the sequence should be.” But with all of these songs, I definitely thought about them all more in the context of a record. I was sequencing as I was going [in the writing process], because I knew that was something I hadn’t considered last time. I also chose an intro and an outro to kind of make it feel more like a cohesive piece.

Were you writing each song on the record in order of the tracklist?
Not really, but I would finish a really slow song and say to myself, “Man, I would love to play live and be able to do some kind of faster, more uptempo stuff – maybe I should write a song like that next.” At least trying to do that. I don’t even care if I fail when I set out to do a project, as long as I create something I like.

Between your debut in 2017 and Punisher now, you released two records with Boygenius and Better Oblivion Community Center, respectively. Did those projects have much of an influence on how you approached your second solo record?
It does feel like a true ‘second record’, weirdly, because I think of those bands as very separate projects – I definitely wouldn’t consider either of those records to be a follow-up to Stranger In The Alps. But I think I made a better record [with Punisher] for it. And also they all participated on this record in whatever way – Conor was my editor, all the guys sang on it, and I was sharing demos back and forth with everyone. So yeah, I definitely think it sounds different because I made those two records.

Is there a lot of improvisation involved in your playing, or are you more of a perfectionist with the guitar?
I’m definitely not a perfectionist – I basically use the same three chords over and over [laughs]. I think I’d get too distracted if I tried to come up with cool chords on the spot. I have a lot of cool chords in my songs, but I come up with them later, or someone suggests something to me. I’m lucky enough to work with a lot of really big music nerds who say stuff like, “Oh, there’s a passing chord you’re accidentally playing!” That’s always really fun for me.

So you recorded this LP at Sound City. Were you excited to jump in and get your hands on every bit of iconic gear you could find?
Yeah! I mean, I had the same experience with Tony Burg’s house, because he has a lot of iconic gear. And then ARC Studios in Omaha has this epic Neve console that all my stuff was mixed on… Yeah, I’m very lucky to be surrounded by beautiful gear!

What were the guitars you found yourself playing most on the record?
So at Sound City, there’s a really nice Gibson J-45 that used to belong to Glen Campbell, and that was my favourite. It belongs to Tony now, but he brought it to the studio when they moved. It was just beautiful. I think it was probably in a fire or something, because it’s really dry-sounding – but it’s pretty much every acoustic sound you hear on Punisher. It’s just really resonant without being sharp – it’s very dull sounding, which leaves a lot of space. It sits in a really interesting place in the mix.

Are you the type of player that nerds out over all the effects and amps, too?
Oh yeah. We actually ran one of the acoustics through the iPad – there are a couple different iPad apps that we like to use a lot for effects and samplers. But for electrics, I typically gravitate towards the baritones, and I have this Danelectro that I’ll run through a couple of pedals. I have a [Catalinbread] Echorec pedal that we used on a few songs. I like the Mellotron Orchestra pedal a lot too, that was really fun. And then a bunch of different distortion pedals – I used the [Klon] Centaur quite a bit.