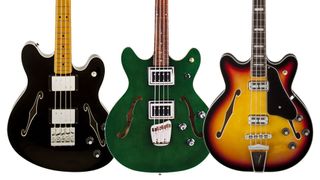 As a musical platform, the short-scale semi-hollow bass has launched some amazing performances. From Rivoli-steeped British blues, to Starfire-fueled Bay Area psychedelia, to EB-2-injected proto-jazz/rock fusion, the 30"-scale axe has rightfully earned its seat at the “real bass” table.

This trio illustrates the broad spectrum of what the genre offers, each with its own distinct personality and voice.

The Coronado is a reissue of Fender’s first semi-hollow bass, while the Starcaster is a model that never quite made it to market in 1976. The Guild Starfire is a faithful rendering of a classic, and coincidentally, also a Fender product.

Whether you simply want an alternative voice in your arsenal, or you’re looking for a main axe that breaks the mold, this species of instrument has many charms, and this trio of shorties opens up the playing field considerably.

An early product of Fender’s then newly-seated CBS management, the original 1966 Coronado bass did not catch on in a big way, and production was halted in 1971.

The first Coronados were fully hollow-bodied, making them more prone to feedback, but the reissue features a semi-hollow body with maple top and back, and like the Starcaster bass, an alder tone block into which the pickups and bridge are mounted.

The DeArmond single coils of the original are replaced with a set of FideliTron humbuckers (a Gretsch-like pickup also found in Fender's Cabronita Precision), with individual volume and tone and a 3-way toggle switch. The carved wooden “F” logo tailpiece remains unchanged, and while the two-point floating bridge is less architecturally interesting than the original’s, it’s functional and solidly anchored into the tone block.

The top strap button is mounted to the body at the neck heel, but the weight of the body and shorter neck allow the bass to sit comfortably without neck-dive. This instrument is part of Fender’s Modern Player line, and is “Crafted in China.”

In 1976, Fender released a short-lived, semi-hollow guitar model that has since developed a cultish following.

While a few early prototype bass models were said to have been built, they never made it to the market— making the new Starcaster bass more of a reanimation than a reissue.

The Chinese-built addition to the Modern Player series sports two massive Fender “Wide Range” humbuckers, with separate volume and tone and a 3-way toggle switch. The bolt-on maple 22-fret neck has a 9.5"-radius maple fingerboard. The smurfy headstock and offset body shape give the Starcaster a distinctive look, and the top strap button’s placement makes the bass hang more like a solidbody.

The Fender Hi-Mass bridge is a non-traditional choice for this type of instrument, but it eliminates some of the string-length issues that can pop up with floating bridge/tailpiece designs, and it also contributes to clarity and sustain.

The new Starfire bass, part of Guild’s Newark St. Collection, is a well-done tribute to an instrument that is iconic in its class. Introduced in 1965, the original Starfire was Guild’s first electric bass, and it featured technology imported from Swedish guitar manufacturer Hagstrom.

Powered by the now-legendary Bi-Sonic pickup, and sporting a bridge/tailpiece assembly that looks like it came off a 1960 Volvo, the Starfire had its own voice. The reissue features a single Guild Bi-Sonic pickup in the original bridge position; later models placed it in the neck position, and there were two-pickup models built as well.

Like the original, the Starfire has a slightly longer 30.75" scale, and has an archtop laminated-mahogany body and mahogany neck, with 21 frets embedded in a rosewood fingerboard. A set-neck design is classic for this type of instrument (the Guild is the only one of the trio with that construction).

The neck is glued into the body, which is said to offer the sustain of neck-through-body construction with some of the punch associated with a bolt-on neck. The bridge is a somewhat rustic yet effective apparatus, with individually adjustable rosewood string saddles that gave the Starfire a big advantage in the intonation department.

The dual finger- rests are another holdover from the original; they come in handy for plucking-hand placement in the absence of a neck pickup. This Korean-built reissue has a refined feel, and comes with a higher price tag than its two Chinese siblings.

If you’re accustomed to solidbody basses, the semi-hollow design will require a bit of adjustment— not only to the shorter scale length, but also to the dimensions of the instrument itself.

The larger bodies are typically bound, with hard right angles where your plucking hand passes over the side. There is no “belly cut” in the back, and in many cases the reach for the lowest positions may be longer, despite the shorter scale length. It will take some experimenting to find the ideal strap height, but realize that a short-scale bass will never hang like your P-Bass.

Out of the review basses, the Guild has the most traditional build of the three, with its set neck extending almost a full 2" farther than the Coronado. Beyond the reach for low F, the greater length of the unsupported neck gives the bass a more delicate feel. The two bolt-on Fenders have shorter reaches, mostly due to the bridge placement, but the necks both join the body at the 15th fret as opposed to the 16th fret on the Guild.

The first step in my testing was to ditch the factory roundwound strings. Sure, you can play a semi-hollow short-scale bass with roundwounds, but I wont. In my opinion, to bring out the earthy thump, organic acoustic quality, and mellower attack that I look for in these instruments, flats are the way to go.

I put a set of D’Addario Chromes on the Starcaster and Starfire, and attempted to put DR Legends on the Coronado, but the hole in the Coronado’s tailpiece was too narrow to accept the slightly fatter Legend E string, even after shaving off the silk wrapping— so the factory strings stayed on.

The Starcaster’s Wide Range humbuckers make it the loudest of the three—the neck pickup in particular is a real earth-mover! Its fat, dub-ready tone would suit many applications, but if you need more articulation, simply flip the toggle switch and use both pickups for slightly less boom and more clarity.

The bridge pickup is super-tight and punchy for solos, but I would probably not try to drive the bus from that position. The Starcaster hangs on the strap fairly well; it felt the most like a “normal” bass to me. The combination of the bolt-on neck and maple fingerboard give the bass an unmistakable Fenderish vibe, but the tone is more in line with a Gibson EB-3 than anything Leo Fender ever built.

The Coronado has an undeniable visual appeal, with the shorter horns and Fender-like headstock creating a neat hybrid of earmarks. The review bass was surprisingly heavy, clocking in at ten pounds, but the weight distribution kept the instrument from neck diving, a common bane of semi-hollow players.

The FideliTrons have less output than the Wide Range humbuckers, but the decrease in thunder makes the Coronado a more balanced-sounding instrument. The bound rosewood board and pearloid block inlays are a deluxe touch that gives the Coronado a classy feel, and the rounded “C” neck profile feels right at home.

With a street price $350 more than its Fender counterparts, the Guild Starfire definitely feels like a finer instrument, partially a result of the set-neck construction. The Bi-Sonic pickup is loud and proud and surprisingly full-range, but Guild’s decision to go period-correct with the bridge placement means you have to add lows to get some balls.

While the pickup placement lets you retain note clarity even when cranking the lows at the amp, the instrument lacks the boom factor of the other two. The tone is distinct and clear, and with more “classical”- sounding strings like Thomastik Infeld Jazz Flats, you could easily coax a very musical, acoustic-type sound from it. For my taste, I would have preferred to see this pickup in the neck position, or even better, to have two pickups. But, the Starfire reissue is a cool instrument that nails the original’s vibe.

I would be hard pressed to pick out a favorite of the bunch, as each had qualities that I liked. The Starcaster has the biggest tone—capable of flattening a city block with one note—while the Coronado may be the most versatile and balanced of the three. The Starfire is a real beauty, with classic looks and a luxurious feel, but it’s a tad sonically limited. In a perfect world, I would take all three—and in this price range, it’s not inconceivable.