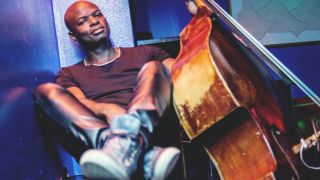 Bassist and bandleader Richie Goods has played with a stellar cast of stars including Alicia Keys, Common, Whitney Houston, Lenny White, Christina Aguilera, and many others.

Prolific and gifted, Goods returns with a new album, My Left Hand Man, in honour of his late mentor, pianist Mulgrew Miller. And here he walks us through his career, some of the choices he has made to make him one of the bass world's brightest stars, and the approach he took in capturing Miller's personality on record.

What kind of person was Mulgrew Miller, Richie?

"Mulgrew was the most amazing person I’ve ever met. He was one of the most respected jazz musicians on the scene, and such a kind, friendly, fun-loving person. He didn’t drink, he didn’t do drugs, he didn’t smoke, but he didn’t look down upon people that did these things.

How do you go about translating a personality like that into your record?

"A part of me was like, ‘I just want to do his music justice,’ and I was a tiny bit concerned what people would say, because I took some of Mulgrew’s great jazz compositions and made them into R&B songs.

"But the thing is, Mulgrew played in my first band in New York. I had a fusion band. Mulgrew played my very first gig. It was Mulgrew, Cindy Blackman, and Jeffrey Lockhart. Mulgrew played Fender Rhodes and synthesizers in a tiny little club with me, so his mind was open, and so I know he would appreciate it."

The bass is full and front and centre on the album.

"Thank you. I use a Fodera Emperor Standard. It’s a five-string, and I endorse D’Addario. I love their really bright strings, the Pro Steel 45 to 130 gauge. On the acoustic bass, I use D’Addario Pizzicato. I love those. They’re kind of difficult to bow when I need to bow, but for pizzicato, man, they sound beautiful.

"All the bass tracks were recorded live. That’s how I knew I got the right musicians, because I felt so relaxed in the studio that every song was either one or two takes. I feel like when you start to get into too many takes, the music starts to lose its magic and then I start losing perception."

How did you first get into bass?

"I started playing piano when I was five. I always wanted to be a drummer, but my mother said, ‘You have to play the piano first.’ I studied from age five to age eight, and then she said, ‘Now you can play the drums.’

"I kept playing drums and piano, and then I started playing saxophone. When I went to a performing arts high school, I auditioned on drums and saxophone, and I also played xylophone in the jazz band.

"Then I wanted to play electric guitar, and this guy was supposed to give me a guitar. I gave him some money, and he ended up giving me a bass because he didn’t have a guitar to give me. I fell in love with the bass and I just went insane practicing.

Were you following a programme of study?

"I would go through different things in my practice routine. I always allowed myself time just to play, to create something that I loved on the bass. I would devote a lot of time to technical things. I took acoustic bass lessons, so I learned proper hand positioning, but most of my electric bass training is self-taught, and a good part of the acoustic bass is self-taught, too.

"I would develop my own exercises. I would learn a solo or something, or a melody, and I would come to a tricky part that I couldn’t play, and so I would make that into an exercise and figure out, ‘What is the problem, the left hand or the right hand?’ I would make exercises out of those, and I would run those for hours."

When the passion hits you when you’re young, nothing’s going to get you off that instrument.

"No, it wouldn’t. But also, I grew up in Pittsburgh, in a predominantly black neighborhood. I was into rock music, folk music, gospel music, R&B, funk, and rap.

"I was into all of that. In my neighborhood, it was all about the bass. It was all about Bootsy Collins and Louis Johnson. It could be the most simple bassline, but if I could play that, everyone in the neighbourhood thought I was the baddest dude."

Which other bass players influenced you?

"Bootsy was the number one, my very first influence on the bass. Later, when I was about 15, a friend of mine told me, ‘You’re a bass player, right? So you’re going to see Stanley Clarke.’ I said, ‘Who?’ and he was like, ‘You call yourself a bass player and you don’t know who Stanley Clarke is?’

"So I went to see Stanley on a school night. The opening band went on at nine o’clock, so Stanley came on about 11. I was tired, but when he came on, my mind was just blown. He’s the reason I started playing acoustic bass. I said, ‘Stanley Clarke is the best, and he plays electric and upright, so I have to play electric and upright.'

Have you been a musician since then?

"My whole life has been music and sports. I’ve been so dedicated to both of them since I can remember. I played every sport under the sun. I really wanted to be a professional football player, and around high school I had to decide if I was going to go to my local high school and pursue football, or go to the performing arts high school.

"My counsellor urged me to take the latter route. He said, ‘You have this gift for music. You should go to performing arts high school, with the intention of being a professional musician’. I said, ‘You mean I could get paid to do this? This could be my job?’ He said, ‘Oh, absolutely.’"

"I wish I knew who that counsellor was, at Gladstone High School in Hazelwood, Pittsburgh, because he made a career in music seem possible to me. Some people think music is hit or miss, it’s luck of the draw, maybe you can get your big break.

"He didn’t make it seem like that. He made it seem like, if you want to be a doctor, you put in the work, you study, and you’ll be a doctor. I always said, ‘This is what I’m going to do.’"

Did you always have that confidence?

"I’ll never forget the first day at the performing arts high school. The first day, the music teacher said, ‘Don’t think that you’re going to make a career out of music.

"Probably only one of you in this whole graduating class will.’ I didn’t know anyone in that school, and I stood up and faced the class, and I said, ‘Well, sorry, guys. That’s going to be me’. I wasn’t a cocky person. I was always really humble, but when it came to music, I was confident. I just knew that making it was not a question."

People are going to love your new album.

"Thank you. I spent a lot of time working out the arrangements, about six to nine months going over it, picking the material. But once we got in the studio, I had the right guys, and I feel like they just made magic happen. I’m really happy with it. I think Mulgrew would be happy, too."