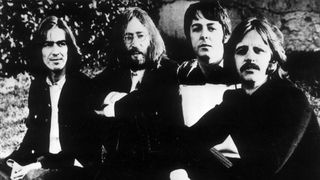 If “1970 in Beatles history” conjures mental images of a miserable-looking John Lennon, Paul McCartney, George Harrison and Ringo Starr sitting around playing The Long and Winding Road in a dark, depressing studio, you’re missing out, my friends.

First of all, all those long faces seen in the band’s 1970 film, Let It Be, were filmed in early 1969. During the bulk of ’70, all four Beatles were diving head first into their brand-new solo careers, and it was an exciting, fun time for all involved - fans included. That energy comes through in the dynamic guitar work of all three Beatles guitarists on their debut solo albums - and let’s not forget that Ringo was hangin’ with some serious pickers himself.

Here are nine studio albums that explain exactly what John, Paul, George and Ringo (and his guitarists) were up to in that crazy year we call 1970. The albums are organized by release date. Enjoy!

For more on what exactly happened to the Fab Four in 1970, read our exhaustive feature on the inside story of The Beatles' turbulent break-up - and what came next.

Ringo kicked off 1970 with a covers album packed with the kind of songs his mother should know - standards like Love Is a Many Splendored Thing, Bye Bye Blackbird and Stardust, which was arranged by Paul McCartney.

While there’s not a lot of guitar to speak of (and not a hint of irony), there is the mesmerizing solo break on the title track. Although it’s buried in the mix, it sounds like an electric guitar played through a talk box and wah. Hell, it might even be a pedal steel guitar through a talk box, a la Pete Drake’s Forever. Oddly enough, Drake turns up later in our story.

McCartney plays every instrument on his post-Beatles, pre-Wings solo debut, including, of course, every ounce of guitar. And there’s gallons of guitar here - including his electrifying Maybe I’m Amazed solos (which feature one of his favorite soloing techniques, the pre-bend and release) and laid-back country pickin’ on Man We Was Lonely.

There’s also a surprisingly healthy offering of guitar-centric instrumentals, including Valentine Day, Singalong Junk, Hot As Sun and Momma Miss America. Even his "Hey, listen to me play the drums!" tune, Kreen-Akrore, ends with some tasty pentatonic licks that set the tone - literally and figuratively - for 1971’s majestic Too Many People.

Although it was mostly recorded in early 1969, months before Abbey Road was recorded, Let It Be features at least one bona-fide 1970 recording, namely I Me Mine, which George Harrison, McCartney and Starr tackled in early January.

The same three guys wouldn’t work together - in the same room, that is - until the mid '90s, when they added their respective parts to John Lennon’s Free As a Bird and Real Love, thus creating two new top-10 Beatles songs in an era dominated by Alanis Morissette and the Smashing Pumpkins.

Guitar highlights include Harrison’s stinging Let It Be and One After 909 solos - the former played on his “Lucy” Les Paul and the latter on his rosewood Telecaster - and Lennon’s fun For You Blue lap-steel rave-up. Lennon also puts his all into the P-90-powered solos, riffs and fills on Get Back.

Harrison - who was a very busy Beatle in late ’69 and early ’70 - co-produced and played on these two Apple Records releases, which were released the very same day. He even assembled the studio bands and co-wrote songs on both discs.

While Doris Troy mostly spotlights Eric Clapton’s fretwork, Encouraging Words features what is probably Harrison’s most Beatles-esque non-Beatles guitar riff: on Sing One For The Lord, which he wrote with Billy Preston, note how George and his Leslie-fortified Strat smoothly navigate the arpeggiated open chord changes C - G - A7 - Baug during what may be considered the song’s pre-chorus or bridge section, as he lets his open G string ring out for the entire ride, creating a rich-sounding common tone among all four chords.

By the way, Clapton and Starr play on both albums.

In late June, the Beatle went down to Nashville to record a country album with Charlie Daniels, Jerry Reed, The Jordanaires and pedal steel guitar legend (and Beaucoups of Blues producer) Pete Drake, who he met in May while working on Harrison’s All Things Must Pass.

Honestly, no one seems to know who played exactly what on exactly which song - since there were so many Nashville session aces involved - but there’s no mistaking Reed’s trademark nylon-string wizardry on the super-engaging $15 Draw, which GW once named the greatest guitar moment on a Ringo Starr solo recording.

“The solo has a precisely articulated staccato quality,” says GW senior music editor Jimmy Brown. “It sounds alternate picked, which is kind of an unusual thing to do with a thumbpick, but doable if you’re Reed, although he may have also brought his pick-hand fingers into play, in an alternating manner with the thumbpick. It’s also possible that he used a flatpick for this solo.”

7. George Harrison - All Things Must Pass

This triple-disc was - and still is - Harrison’s finest hour (and 45 minutes). The guitarist, a junior songwriting partner to Lennon and McCartney for nearly a decade, finally emerged from their colossal shadows with a masterpiece packed with dreamy textures, intelligent lyrics, soaring melodies, hit singles - and guitars, guitars, guitars.

During Harrison’s My Sweet Lord solo, the one that starts at 2:47, his intonation and muting tidiness (super important when playing slide in standard tuning) are impeccable. Reprising his intro lick a whole step higher, now in F# and with a brighter, bridge-pickup tone, he outlines his chord progression with a bold, slippery melody based on major, minor and diminished-seven arpeggios, the latter harmonized in thirds below the melody via an overdubbed second lead guitar.

Harrison shared the lead-guitar spotlight with Clapton, who can be heard on Art of Dying, I’d Have You Anytime and a goodly portion of the Apple Jam (AKA disc 3).

Meanwhile, Drake steals the show on Behind that Locked Door and a glorious outtake called I Live for You. The album also features Dave Mason, Peter Frampton, Badfinger, Derek and the Dominos and - you guessed it - Ringo.

John and Yoko ended the year with a one-two punch of rough-around-the-edges albums recorded at the same time with the same band; Lennon is the only guitarist in the vicinity and Ringo is the drummer (Of course he is! He appears on eight of the nine albums on this list).

For Lennon’s most avant-garde guitar playing, look no further than Why and Touch Me from the Yoko disc; for a continuation of Lennon’s “I’m gonna sing along with these pentatonic licks as I play them on my guitar” approach heard on Abbey Road’s I Want You (She’s So Heavy), check out Well Well Well and I Found Out from the John disc.

Perhaps coolest of all, however, is the acoustic gem Look at Me, which sounds like a younger sister to Julia, the White Album tune. As he does on Julia, Lennon employs clawhammer picking, which is similar to Travis picking (named after country guitar legend Merle Travis).

The difference is in the alternating bass pattern, played by the thumb. With clawhammer, the thumbpicking pattern goes 5-4-6-4 (in terms of strings). In Travis picking, the thumb goes 6-4-5-4.

By the way, we should also mention that Lennon actually kicked off 1970 with a hit single - Instant Karma! - which he recorded January 27 and released February 6. The tune, which reached Number 3 on the Billboard singles chart in the US, features input from Harrison, who also played on Lennon’s Imagine album in 1971.