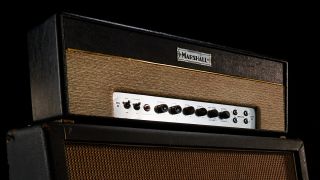 No-one can dispute the fact that without the right gear, the heavy, distorted guitar tones that we all know and love would never exist. Some might argue that a key element - distortion - was always there since the very beginnings of the electric guitar, but the evolution of the heavy guitar sound from a gear perspective is much more complex than that, involving a combination of a holy trinity of elements - distortion, excessive volume and bass.

Fortunately, technological progress made these three attributes available at about the same time that creative and cultural attitudes changed to support the new sounds that guitar and amplification equipment offered to players who were willing to expand the boundaries of previous eras.

In the beginning there was distortion, and it was good. The very first commercial guitar amps that appeared in the early '30s were tiny, low-wattage combos designed for Hawaiian/steel guitars that featured crude circuits and low-efficiency speakers that created glorious distortion when turned up beyond polite output levels.

The problem is most guitarists didn’t want that. Instead, they demanded tone that was clean, pure and more closely resembled the acoustic tones they were familiar with.

Manufacturers determined that the solution was to design amps with higher output power and bigger speakers to ensure that there was enough clean headroom to allow electric guitars to compete with horns and drums in big bands.

The Gibson EH-150 - acknowledged as the first amp designed for Spanish (i.e. traditional) six-string electric guitars - was a big step in the right direction, providing 15 watts of output power and a 12-inch speaker that delivered a wider frequency range of tones.

A “hidden” feature of the EH-150 was its microphone channel, which featured a higher gain circuit than the more “polite” instrument channel. In a very primitive sense, the EH-150 provided most of the basic elements for heavy guitar tone, but most guitarists weren’t even aware of its capabilities as few experimented with the “forbidden” mic channel and even fewer liked what they heard when they did.

As players and the public began to increasingly accept the electric guitar during the '40s, a handful of players began to push the boundaries of acceptable tones. During this time, Hubert Sumlin discovered the EH-150’s mic channel magic while playing with Howlin’ Wolf.

In the late '40s, guitarist Junior Barnard of Bob Wills’ Texas Playboys gleefully reveled in the raunchy tones he was getting with an ersatz humbucking pickup he configured by wiring two single-coil pickups together and cranking his amp up into the danger zone.

Meanwhile on the guitar technology front, Leo Fender, In his quest to perfect a loud and clean amp, introduced the Dual Professional with an 18-watt circuit and two 10-inch speakers in 1947, changing its name to the Super the next year.

Another critical element in the evolution of heavy guitar tone emerged during the early Fifties with the introduction of the first commercially produced solidbody electric guitars, with the Fender Esquire making its debut in 1950 and Gibson’s first Les Paul model appearing in 1952. The solidbody guitar solved the problem of unwanted feedback encountered with hollowbody electric guitars, which became more of a problem as amps became louder and more powerful.

In the late '50s, Gretsch and Gibson introduced humbucking pickups that were originally designed to reduce the noise interference problems associated with single-coil pickups but that also delivered higher output and thicker tone. However, those attributes were not fully exploited by guitarists until a few years later during the mid '60s.

Leo Fender continued to refine his amp designs during the Fifties, introducing the 25-watt Twin combo with two 12-inch speakers in 1953 as well as the first amp designed for his new electric solidbody bass - the 26-watt Bassman - in 1952.

Over the next few years, Fender steadily increased the output power of the Twin and Bassman circuits. By the end of the Fifties, the Twin provided 80 to 100 watts while the 1958-60 5F6-A Bassman offered a respectable 45 watts harnessed to a potent configuration of four 10-inch speakers.

Although the Bassman was initially intended for electric bass, many guitarists fell in love with the rich, full and robust tones that the 4x10 combo delivered when they plugged their guitars into it.

At the same time as amps became bigger and louder, and solidbody guitar designs made it easier for guitarists to play at exceedingly louder volume levels, guitarists also began to push the boundaries of what was considered acceptable guitar tone. Many Chicago blues guitarists delighted in the saxophone-like sounds they got from turning tiny combos all the way up, with Pat Hare’s 1954 gem I’m Gonna Murder My Baby providing some of the nastiest, grittiest guitar grind of the era.

A few guitarists got off on the sounds of damaged or malfunctioning amps, like Willie Kizart on the 1951 single Rocket 88 and Paul Burlison, who famously exploited a loose power tube on his Fender Deluxe amp to generate horn-like distortion on recordings with The Rock and Roll Trio.

Link Wray deliberately sought distortion when recording the instrumental single Rumble in 1958 by using a pencil to jab holes in the speakers of his Premier 71 combo, attempting to replicate the sound of a fully cranked amp at a studio-friendly volume level that wouldn’t overdrive the mic.

Kinks guitarist Dave Davies imitated this primitive approach in 1964 when he slashed the speaker cone inside his tiny Elpico AC55 combo before recording You Really Got Me.

During the early '60s, another happy accident paved the way for an invention that led to some of the heaviest guitar tones known to mankind. In 1960, hotshot studio guitarist Grady Martin was recording a bass part for Marty Robbins’ single Don’t Worry when the channel on the tube mixing console he was plugged into went on the fritz.

Intrigued by the buzzy square wave distortion that the faulty channel produced, Martin and producer Don Law decided to feature this unique sound on the single despite Robbins’ objections. When the single became a Number One hit on the country charts, engineer Glenn Snoddy decided to preserve the channel in its broken condition, which Martin later used on several country recordings, including his own instrumental single The Fuzz.

Soon Snoddy came up with the idea of inventing a standalone circuit that reproduced that sound and housing it in a compact pedal with a footswitch so players could engage the effect whenever desired. When Gibson found out about Snoddy’s invention, they bought the rights to manufacture what became the world’s first fuzz pedal, the Maestro FZ-1 Fuzztone, introduced in 1962.

Meanwhile, Leo Fender kept on designing bigger and more powerful amps. In 1960, he came up with the idea of building the amplifier and speakers in separate cabinets in a configuration known as a piggyback amp. Fender amps started to become popular with musicians in England during this time, but the prices were too expensive for most musicians to afford.

When drummer Jim Marshall opened a drum shop in 1962, he realized that many guitarists needed an affordable amplifier that was loud enough to be heard over drums and that the small, low-powered combos made in the U.K. by Vox, Watkins, Selmer and others weren’t fulfilling that need.

In 1963, Marshall hired electrical technicians Ken Bran, Dudley Craven and Keith Underwood to design a new amp. All three agreed to base their design on the Fender 5F6-A Bassman but with a few significant modifications, such as different output transformers, an aluminum chassis, an ECC83 (12AX7) tube instead of the Bassman’s weaker 12AY7 at the front of the preamp circuit, an extra brightness capacitor, different input sensitivity and more, which all gave the Marshall amp its own distinctive tonal and distortion character.

They also decided to configure the amp as a separate head and closed-back speaker cabinet featuring four 12-inch Celestion speakers. The result of their efforts was the JTM45, and it was tested and approved in the early design stage by the lauded Lord of Loud, Ritchie Blackmore.

With the introduction of the JTM45 amp, the rock-solid foundation for heavy guitar tone was finally laid. This amp and 4x12 combination was suitably loud; it delivered deliciously aggressive, harmonically rich distortion tones; and its bass was big, tight and, well, heavy.

In their insatiable quests for maximum volume, pro guitarists like Richie Blackmore, Pete Townshend and Big Jim Sullivan pushed Marshall to build even more powerful amps and bigger speaker cabinets. When Marshall’s fabled 8x12 cabinet proved too unwieldy for even the burliest roadies, the option of stacking two 4x12 cabinets was suggested and the concept of the stack amplifier was born. The output of Marshall’s amps soon increased from 40- to 50- to 100- to 200-watts during the '60s.

As fuzz guitar became a hit in the U.S. with country guitarists and instrumental surf bands like The Ventures during the early '60s, the sound soon started to make its way to England. In 1964, British electrical engineer Roger Mayer built custom fuzz pedals for Big Jim Sullivan, Jeff Beck and Jimmy Page, who was a session guitarist at the time, and Pepe Rush developed the Fuzzy pedal, followed by the Pepbox.

These were soon followed by the Sola Sound Tone Bender and Arbiter Fuzz Face. Meanwhile, another rudimentary distortion device called the treble booster appeared on the market as well, with notable early examples being the Dallas Rangemaster and Hornby Skewes Treble Booster.

One of the most revelatory moments in the birth of heavy guitar tone came in March of 1966 when Eric Clapton was recording with John Mayall & the Bluesbreakers. During these sessions Clapton used a sunburst 1960 Gibson Les Paul Standard with a pair of humbucking pickups plugged into a Marshall model 1962 amp, which was a studio friendly 2x12 combo version of the JTM45 half stack Clapton had been using previously.

Clapton’s selection of the PAF-humbucker equipped Les Paul was mainly a convenient coincidence. Les Pauls were rare finds in England at the time, and Clapton bought it thinking it was the same as Freddie King’s earlier P90-equipped Les Paul.

One other seemingly minor but monumentally important element in the emerging sound of heavy rock guitar was the shift in popularity from flatwound to round-wound strings during the mid '60s.

The increased brightness and liveliness of roundwound strings resulted in guitar tones with more clang than twang, which was a perfect complement for the increasingly distorted tones that rock guitarists preferred. The adoption of lighter string gauges also encouraged more flamboyant techniques such as dramatic bends and deep vibrato bar dives.

Fortuitously, Jimi Hendrix arrived in England in late 1966 just as all of these gear developments were starting to coalesce. While he certainly would have created similarly impressive sounds if he had remained in the U.S. instead, it’s doubtful he would have sounded quite as heavy using Fender amps instead of Marshall's and a Maestro Fuzztone instead of an Arbiter Fuzz Face, not to mention his innovative collaborations with pedal guru Roger Mayer.

What Hendrix did with his Fender Strat, Marshall stacks and assortment of pedals soon completely changed how the world viewed the electric guitar, and since then, guitarists have never looked back.