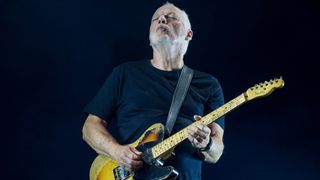 One of the standout tracks from Pink Floyd’s ambitious concept album The Wall, Comfortably Numb has an enduring status as a timeless classic, thanks to David Gilmour’s dazzling, emotional guitar work, which has consistently earned top honors in “best guitar solo” polls over the last few decades.

Gilmour’s performance on the song’s two solos are master classes in phrasing and tone, showing how something that seems simple on the surface can actually be quite sophisticated and complex when one analyzes the finer essential details.

While the solos are the main focal guitar parts of the song (and hence this article as well), acoustic and pedal steel guitar tracks also contribute notable roles.

Gilmour played a ZB SS10 10-string pedal steel processed with a long, repeating delay and reverb for the intro and first verse, and an Ovation Custom Legend 1619-4 with modified “Nashville” tuning (with a high E replacing the low E and octave-up A, D and G strings replacing the regular A, D and G) provides the acoustic guitar rhythm track on the choruses and remaining verses after the first.

For the solos, Gilmour played his iconic black 1969 Fender Strat into an amp setup that was essentially a smaller version of his stage performance rig, consisting of a 100-watt Hiwatt half stack and a Yamaha RA-200 revolving speaker system, with the Hiwatt and Yamaha run in parallel.

The Strat and Hiwatt head had custom modifications that shape much of the distinctive tonal character of both solos.

The Strat’s DiMarzio FS-1 bridge pickup provided hotter output than stock Strat pickups, and a separate toggle switch that engages the neck pickup allowed Gilmour to use the bridge and neck pickup together for the first solo for added body and sustain.

Gilmour’s Hiwatts also have custom linked inputs that combine the Normal and Brilliant channels in parallel, similar to jumping the channel inputs on a four-input model or using a Y-cable.

The key to Gilmour’s smooth, singing sustain is to provide a strong signal up front (courtesy of the hot FS-1 pickup and MXR Dyna Comp [compressor]) while also stacking gain via the Big Muff and Hiwatt, each set to moderate volume levels that combine into something bigger than the sum of their individual parts.