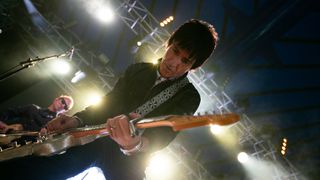 Johnny Marr said he wanted the intro to the Smiths’ How Soon Is Now? to be as potent and recognizable as Layla. But instead of writing a catchy melody or bombastic riff, he took an entirely different approach by crafting a hypnotic, pulsating groove by running his rhythm electric guitar track through four amps to generate a lush, complex stereo tremolo effect.

That trippy tremolo rhythm track along with several inventive guitar parts throughout helped make How Soon Is Now? one of the most memorable and enduring alternative music recordings of the '80s.

Marr’s performance can be broken down into five distinct parts: the tremolo-heavy rhythm, a howling doppler effect slide, a melodic line during the chorus, random lead noodling and a marimba-style line played with harmonics.

For the main rhythm track, Marr recorded a simple rhythm part using his 1963 Epiphone Casino tuned up a whole step to F# with a blackface Fender Twin Reverb with the tremolo effect off.

Next, he and producer John Porter re-amped the rhythm guitar track into four Twin Reverb amps, all with the tremolo effect engaged. The key to the pulsating rhythm is to set the first amp’s tremolo speed to about 125 bpm then run it into a second amp with the tremolo speed set to about 375 bpm to generate a bouncing triplet pattern that pulsates in a somewhat random manner.

For the doppler effect train horn, Marr tuned the Casino’s second string down a half step to C and used a slide on the second and third strings. Then Porter had Marr record overdubs of Marr playing the same part on single strings through an AMS-DMX 15-80 set to pitch-shift settings that replicated the same intervals, raising the pitch a third on the G string and dropping the pitch a third on the B string. These three tracks were then blended together, with the AMS processing giving the tone an otherworldly texture.

The melodic single-string line during the chorus was recorded in a straightforward fashion with the Casino going into the Twin with generous reverb (and possibly additional digital reverb added) and a hint of overdrive to enhance midrange, body and sustain. The random noodling lead is a sample recorded into the AMS unit with the pitch transposed up an octave that was triggered at strategic points.

The crowning touch was the marimba-like melody that Marr created by tuning each open string to the desired notes for the melody and playing harmonics at the 12th fret. He plucked the strings near the bridge to create a percussive attack and recorded several unison layers.

Individually, each part is not particularly complicated (with the exception of the meticulously crafted tremolo rhythm) but together they add up to a distinctive symphony of sumptuous sounds.

TONE TIP: Set the Mustang amp’s tremolo to a fast speed (about 375 bpm) while the TR-2’s speed is set to about 125 bpm to create a bouncing, pulsating triplet effect. The TR-2 should also be set to a smooth triangle wave rather than choppy square wave tremolo so the individual effects blend more hypnotically.