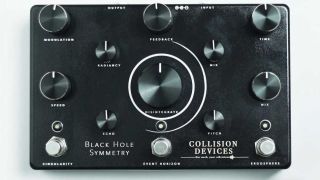 The Singularity footswitch on the left side of the pedal is the unit’s "destructive" fuzz, which is adjusted by a “Disintegrate” volume knob.

The center-placed Event Horizon footswitch is the pedal’s space reverb, with controls for mix, echo, “Radiancy” and pitch.

On the right is the Ergosphere modulation delay, with controls for mix, time, feedback and modulation.

According to Collision Devices, the pedal “was designed to represent the visual and sonic appearance of a black hole. The sound did not move in space, it was necessary to imagine what any human being would be able to feel when confronted with this giant mass.”

For more information, head over to Collisiongears.com.