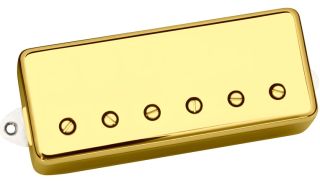 The new models are the Notorious Minibucker Bridge (DP283), Notorious Neck (DP284) and Notorious Middle (DP284S). All three feature gold covers, are made in the U.S.A. and are available now.

The Notorious Neck and Middle pickups boast calibrated, degaussed Alnico 5 magnets to capture the dynamics of vintage single coils. Henson calls the pickups “great for chords and ringing notes that hold through each other.”

The Notorious Minibucker Bridge, meanwhile, is designed to have moderate output in order to balance with Henson’s Notorious single coils in the neck and middle.

Additionally, DiMarzio has announced the release of the Igno (DP285F) humbucker, developed for Henson’s co-guitarist in Polyphia, Scott LePage.

The Igno features Alnico 8 magnets for increased output, as well as DiMarzio’s dual resonance design with both coils scatter-wound to produce a warm response that’s not too high in the mids.

For more information, head over to DiMarzio.com.