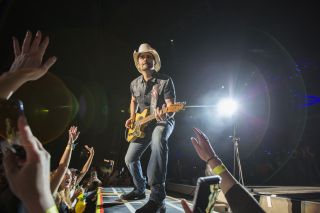 Let's dive right in, shall we?

No other guitar is more closely associated with the sound of country music and its players than the Fender Telecaster.

Chances are, most of the chicken pickin’ and string poppin’ licks you’ve heard in country songs were done on a Tele or any other variation of this iconic instrument. There are many reasons why the Telecaster is often employed for country music, but here are our top three: First, its perfectly simple and modular design lends itself to easily modify and repair the guitar quickly when necessary.

Finally, the guitar’s 25 1/2–inch scale length combined with a single-coil pickup on a steel bridge plate with brass saddles and strings routed through the back of the body all contribute to the harmonic sparkle and percussive snap — or “twang” — a Telecaster is known for producing.

And for those reasons and more, Fender produces several different Telecasters to accommodate any flavor of country or rock, with the new Fender American Performer Telecaster (pictured below) and the Fender Brad Paisley Road Worn Telecaster as two of my favorites. However, not all country guitarists are using Teles. In fact, if you look at today’s modern country players, they are using everything but a Telecaster.

For example, Jason Aldean’s guitarists, Jack Sizemore and Kurt Allison, have been spotted using Gibson Les Pauls and EVH Wolfgangs, and even Nashville’s most preeminent session guitarist, Brent Mason, has his very own PRS Guitars Brent Mason signature guitar, while the great Albert Lee has a signature Ernie Ball Music Man model. PRS Guitars also has recently introduced the S2 Vela Semi-Hollow, which combines an offset body shape and new pickups with a range that evokes the “twang” of a Tele as well as the punch of other solidbody guitars.

Modern country is having a renaissance in its perceived sound, and with that, the guitars and gear most associated with country have certainly changed.

Just like the Fender Telecaster, most classic country guitarists have favored an all-tube Fender combo amplifier with reverb paired with it.

Because Fender makes a wide range of amplifiers, many players can be seen with something as sweet and punchy as the 22-watt Fender Deluxe Reverb or as loud and cutting as the esteemed 85-watt Fender Twin Reverb. Some country guitarists also love the scrappy 50-watt Fender Bassman with four 10-inch speakers for raunchy overdrive and touch-sensitivity when its volume is pushed to the edge. Depending upon the player’s individual style and volume needs, most country players will agree that a great tube combo amp needs to be loud and clean.

Here, a higher-watt amp with 6L6 tubes, like the Fender Twin, Fender Hot Rod Deville and Hot Rod Deluxe IV, Carr Impala and Peavey Classic amplifiers will provide a glassy tone for sparkling clean sounds, as well as adding some crunchy overdrive. But there are also many other country players who love to turn their amps up loud for a slightly overdriven sound but still remain defined.

Country virtuoso Brad Paisley is one of those players who relies on an amp’s overdriven volume to achieve his tone, and for that he uses a number of his very own signature Dr. Z amps, which are based on a beloved Vox AC30 he owns. These particular amps employ the bell-like tone and sweet midrange of EL-84 tubes, which become remarkably responsive when they are driven into overdrive.

There are other great boutique amps like the Matchless DC-30 that employ those tubes and I find they sound phenomenal for country, but there are other amp designs that use EL-34 tubes to convincingly mimic the sound of both EL-84 and 6L6 tubes cleverly like the 3rd Power Dual Citizen or the Fender Bassbreaker 45. Whichever amp you decide to choose, it’s best to ask yourself whether you get your tone using the amp and your guitar’s volume control, or if you need pedals to sculpt your sound, which leads me to the next topic…

For most players, only three effects — a compressor, an overdrive and an analog delay are essential for playing country.

This simple recipe of effects (and sometimes tremolo) is generally the bread and butter for most classic country guitarists. Again, not the rule, because some modern country guitarists use pedal boards that would rival the Edge’s massive sonic arsenal of stomp boxes. Regardless, once you find the right combination of pedals that sound great to your ears and with your guitar, you can easily create a uniquely signature tone from nearly any clean-channeled amplifier.

Compression is one of the most vital thickening effects for country guitar because of its ability to add more sustain to fatten up clean runs and smoothly tame the sharp peaks of chicken pickin’ licks. It also adds a beautifully lush and boosted clean tone that can sound incredibly dynamic if you have great technique. Some of my favorites are the MXR Dyna Comp, Boss CS-3 Compression Sustainer, Wampler Ego Compressor, Way Huge Saffron Squeeze and Keeley 4 Knob Compressor.

Finding the right overdrive can be the linchpin to your tone, as well as becoming your sonic signature. Overdrive simulates the soft, clipping gain when a tube amp is turned up into overdrive. There’s good reason many players constantly obsess over finding the right overdrive because having that perfect combination of sustain and drive adds so much to the tonal connection you feel between guitar and amp. If you already have an overdriven amp, and add an overdrive pedal, it will push your amp into singing distortion.

Or if you use a clean amp and need more boost to juice your signal into breakup, an overdrive does the trick. Keep in mind, the amount of overdrive pedals is endless, and some brands often use the word “overdrive” loosely to where the pedal can end up sounding more like a distortion. I find the Ibanez Tube Screamer TS808, Boss BD-2 Blues Driver, Fulltone OCD, MXR Custom Badass Modified O.D., EHX Soul Food, Klon KTR, Wampler Brent Mason Hot Wired, Maxon Overdrive OD808 and Truetone Route 66 are among some of my go-to pedals.

One of the most signature guitar sounds used in country, rockabilly and honky tonk music is the slapback echo (a single repeat short delay that emulates a lively room sound), and here is where you’ll need an analog delay pedal. Analog delays are prized for their warmth in tone and tend to have shorter delay times (up to 600–800ms).

You can also use a digital delay but they are often criticized for being overly harsh (digital) in tone. To create that country sound, you’ll need to dial in a short delay time (under 200ms) and set the unit to a single repeat or the delays will start to sound wonky. Some of the best affordable analog delays available are the MXR Carbon Copy, Way Huge Aqua Puss, Boss DM-2W Delay, Earthquaker Devices Disaster Transport Jr, EHX Memory Man, Seymour Duncan Vapor Trail, Tech 21 Boost DLA, Truetone H2O and Strymon Deco and Brigadier. There are also many boutique effect brands that make exceptional analog delays but there are just too many to list — as a starting point, check out companies like Wampler, JHS, Catalinbread and Diamond.

Having the right pickup in your guitar is crucial to getting the country sound, especially if you use a Telecaster. I can say most Tele-style guitars come equipped with great pickups, but if you’re not happy with those, then replacing it is a good option. You can’t go wrong with either DiMarzio’s Area-T pickups, Seymour Duncan’s Antiquity Tele ’55, and Lollar Pickups’ Special-T Series Tele pickup.

If your technique involves plenty of bending, double stops and pedal steel licks, then it’s usually best to have light gauge strings, which typically is a .009–.042 or .010–.046 gauge. James Burton, who played with Ricky Nelson, Elvis Presley and Merle Haggard, and who basically wrote the book on country guitar, used to put banjo strings on his guitar to accommodate his technique. Now, he uses a custom hybrid light gauge (.009–.038) set that works for him.

Picks are totally a personal choice and it really comes to how you were taught to play. Whether you use thumb picks, jazz or standard picks, there is no wrong way to play in this area, but what I can tell you is that Dunlop makes just about every pick imaginable for you to choose from.

Finally, when it comes to accessorizing for country, what’s more important than a thick leather strap for your guitar? Don’t overlook this small detail, because nothing says “I’m country” more than than Levy’s Leathers’ M17VNB leather guitar strap with nubuck inlay.