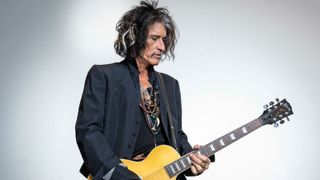 Joe Perry has a long history with Gibson when it comes to designing signature Les Pauls, from his late-'90s, wah-equipped BlackBurst to his early 2000s Green Tiger Boneyard to the 2013 Custom Shop reproduction of his storied ’59 burst. But in his estimation, the new Gold Rush Les Paul Axcess might be his favorite collaboration yet. “It’s probably the closest I’m ever going to get to adorning a Les Paul with all my little touches,” the Aerosmith guitarist says.

Indeed, the Gold Rush is a Les Paul unlike any other, with a slim Axcess body profile, single hot 498T pickup and two-point Wilkinson tremolo system. It’s a guitar designed for the stage, offering classic thick LP tones, but with less weight and the added versatility of a whammy bar. Perry explains: “When I’m in the studio I’ll spend a lot of time messing around with the tone controls and so on. But live I want a guitar that just sounds great so I can focus on the excitement of performing. So we did one pickup, one volume knob and one tone knob, and that’s it.”

Which is not to say that the Gold Rush is a one-trick-tone pony. In fact, it’s quite the opposite. “When Joe came to us, one of the things he wanted was simplification, which is reflected in that single pickup,” says Gibson CMO Cesar Gueikian. “But at the same time he also wanted the ability to extract multiple levels of sound out of that simple instrument.”

To that end, the Gold Rush is equipped with a push/pull coil splitter on the tone knob, enabling Perry to access the sort of sparkly single-coil sounds that are essential to many classic Aerosmith songs. Add in a chunky ’59 C-shape neck, the spring tremolo system and the thinner body and you have, in Perry’s words, “the first signature model I’ve done where they put a little bit of everything I like into one guitar. It’s not all huge stuff, but a few little bits make a big bit, you know?

The Gold Rush is only available in limited quantities - 25 signed and 125 unsigned examples - but Aerosmith fans have been able to witness it in action, as Perry has been using the built-for-the-stage guitar for a handful of songs at every performance at Deuces Are Wild, the band’s current Las Vegas residency. And as is readily apparent to those in attendance, in addition to sounding great, the guitar is a looker, too. “Gibson used an Antique Gold finish that I love, and they did an amazing job of relic’ing it,” Perry says. “It’s a really beautiful piece.

“So now I think I’ve done just about everything I can do with a Les Paul,” he says, then laughs. “After this I’ll just have to design my own guitar from the ground up.”