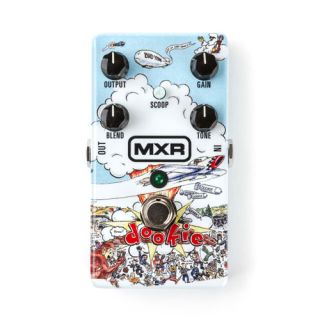 NAMM 2019: Following Billie Joe Armstrong’s tease on his Instagram page last week, Dunlop has officially unveiled the MXR Dookie Drive. The new unit is emblazoned with the cover art from Green Day’s iconic 1994 breakthrough album, Dookie, and looks to capture the sound of Armstrong’s amp on that album, which is believed to have been primarily a modded Marshall Plexi 1959SLP reissue that he had nicknamed Pete.

According to Dunlop, Armstrong’s Dookie tone was derived from “running his signal through two heavily modified amplifiers—one scooped with a ton of gain and the other with a well-defined midrange. When it came time to mix the record, the band blended the two signals together in different ratios to match the vibe of each track.”

For the Dookie Drive, Dunlop borrowed and analyzed the two amps, and then rebuilt them from scratch in pedal circuit form and fit them into a single housing. According to the company, “the High Gain and Clean Gain sections each have their own controls, while the Blend control allows you to mix them together just like Green Day did in the studio. If you want some extra scoop in the midrange of the overall output signal, just hit the Scoop switch.”

The Dookie Drive will be offered for $189.

For more information, head over to jimdunlop.com.