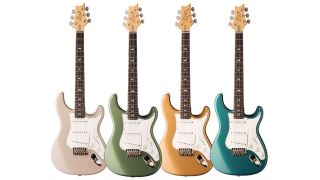 NAMM 2019: PRS has unveiled four new finishes for its John Mayer Silver Sky model of electric guitars. Mayer himself recently shared the new colors on his own Instagram page as well.

The new choices are: Moc Sand, Orion Green, Dodgem Blue and Golden Mesa. The addition of the four new finishes doubles the amount of color options now available on the Mayer guitar.

Last year, John Mayer spoke to Guitar World about the Silver Sky upon its initial release to the public. Regarding his goal for the instrument, he said:

“I wanted to make a guitar that did away with the concept of 'the magic guitar.’ You know, the idea that you could play 10 different guitars of the same model, but only one would be magic. I want all Silver Sky guitars to be great. I want them all to be magic. I don’t suspect I will ever really have a Number One Silver Sky, because all of them will be good. I wanted to eliminate that idea that one has magic wood and the other doesn’t. The thinking was to build a well-designed instrument that would be consistent, no matter which one you played.”

He also addressed criticisms that the Silver Sky is merely a Strat knockoff:

“Of course, there are going to be people who will never embrace it, and that’s fine,” Mayer said. “But it’s been interesting to watch players adapt to it. I think there is a desire for guitarists to hold something that’s a bit evolved.”

For more information on the Silver Sky, head over to PRS Guitars.