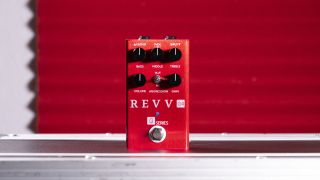 NAMM 2019: Revv Amps has unveiled the G4 preamp pedal, which the company touts as a “thick gain monster.”

The G4 is an update to Revv’s G3 pedal, and is aimed at hard rock and metal players. The new unit offers higher gain tones in the form of a three-way “Aggression” switch—“Red” for all-out saturation & thickness, a tighter “Blue” option, and “Off” for classic tones, & dynamic blues breakup.

For more information and to pre-order, head over to Revv Amplification.