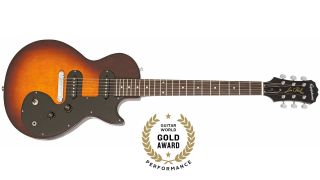 Yes, I know, the Les Paul, Explorer and Flying V, and of course, even the SG will always be considered the “sexiest” models in Gibson’s roster of iconic instruments for rock and roll. As they should be, because these guitars and the very famous players associated with them have created some of the most desirable guitar tones on countless recordings. And then there’s the Les Paul Junior and Melody Maker: two stripped-down guitars that kinda get overlooked and often relegated to the back of the class as “student models.” And that, my friends, is where you’d be wrong. Johnny Thunders, Joan Jett and so many more legendary artists have made these “beginner” models sound downright ferocious — the scrappy junkyard dogs of guitars, if you will — and not to mention, look pretty cool.

Epiphone makes just about every one of the aforementioned models and more, and have always been my go-to company when someone asks me for guitars that not only are precisely set up but also give you the most bang for your buck. Here, Epiphone have merged the Les Paul Junior and Melody Maker into one seriously kick-ass model called the Les Paul SL, which goes to the head of the class as a new breed of “student model” guitars — and as their most affordable Les Paul.

FEATURES Epiphone touts the Les Paul SL as a “slim lightweight guitar,” and they aren’t kidding. Its poplar body is light as a feather but still has all the substantial heft of a Les Paul Junior without feeling cumbersome. My model came in a vintage sunburst, offering up classic looks from the Fifties — but don’t fret, Epiphone is also smart in offering the SL in other very hip solid finishes like sunset yellow and pacific blue, among other colors. The most distinguishing feature of the SL is its custom single-ply pickguard that surrounds the two Epiphone 700SCT (bridge) and 650SCR (neck) ceramic single-coil pickups. Outside of that, the SL is very much a typical single-cut Les Paul Junior with no binding, a mahogany neck, a slim-taper D-profile neck shape, 22 medium jumbo frets, an adjustable intonated “wraparound” stopbar tailpiece, “tophat” master volume and tone controls with a three-way toggle switch and premium die-cast 14:1 tuners.

PERFORMANCE I know what you’re thinking: single-coils and not P-90 pickups in a Junior?!? Trust me, I thought the same thing — until I plugged it in. Epiphone voiced the SL’s ceramic pickups with plenty of body and roundness, which gave these plump single-coils a great deal of touch-sensitivity. Even more remarkable is how balanced and defined they sound overdriven from a cranked amplifier. My first thought is this guitar would be perfect for slide since it has the adjustable wraparound bridge and a flat 12–inch radius on its fingerboard, but after auditioning it with a number of classic Fender, Marshall and Vox amps, I felt the SL could stand on its own as guitar that is poised for rock and blues, with a distinctive tone that cuts on its own terms. What’s even better is how flawlessly the guitar plays, thanks to Epiphone’s consistent textbook setup on its instruments.

● The Epiphone ceramic single-coil pickups sound surprisingly muscular and clear, thwarting any notion this is a wimpy “student model” guitar
● The SL is incredibly lightweight and easy to play and can be setup for any number of purposes, from slide guitar to a howling blues-rock beast
● THE BOTTOM LINE The Epiphone Les Paul SL is more than just an entry-level model that’s affordable. It’s a solid guitar with playability and pickups that give it larger-than-life swagger