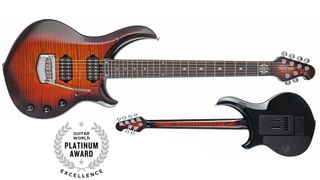 I’ve interviewed Dream Theater’s virtuoso guitarist, John Petrucci, a number of times, and one of the most fascinating anecdotes he’s revealed to me is that he doesn’t own or play any other guitars besides his signature ones — and mostly his Majesty models. All those classic electric guitars that many famous musicians strap on their shoulders do not exist in Petrucci’s arsenal — whether at his studio or in his home, nor on his recordings. I also know quite a few notable guitarists with signature instruments who, on the sly, use other guitar brands rather than the ones that bare their name.

Considering that, it makes Petrucci all the more genuine for playing every Majesty he designs with Ernie Ball Music Man, which is most likely why it’s the company’s most popular artist model. And to take it a step further, Petrucci doesn’t even have a particular favorite Majesty — like “the one he’d grab if the house were on fire.” For him, every Majesty is as perfectly suitable as the next, and that tells me Ernie Ball Music Man gets it right every time in build quality. And I must agree, because every Majesty I’ve ever played has been impeccable. However, after being handed the new Ernie Ball Music Man Majesty Tiger Eye, a limited-edition model of only 300 pieces, I must confess it’s so strikingly beautiful and flawless in design, that it’s “the one I’m grabbing when the house catches fire.”

FEATURES The Majesty line of guitars is rife with varied wood combinations, body finishes and electronics, but Petrucci’s vision of its utility remains the same. What’s new here is the African mahogany neck-through body with alder wings and an almost three-dimensional flame maple that caps its “Tiger Eye” top in a high-gloss polyester finish. The gorgeous flame maple extends throughout the guitar with a center strip on the back of the Honduran mahogany neck and a matching flame maple headstock. The 25 1/2–inch neck features a compensated nut and 24 stainless steel frets on an ebony fingerboard with Atlante Majesty inlays. Electronics include direct-mounted DiMarzio Rainmaker (neck) and Dreamcatcher (bridge) humbuckers, and a piezo pickup system built into the tremolo bridge’s solid steel saddles.

PERFORMANCE I’ve always felt the powerfully voiced Majesty guitars to be aerodynamic speed machines — and they still are — but this new Majesty Tiger Eye is a bit of a departure from that. Instead, I find this guitar to have more warmth and body in tone, despite its appealing light weight. The combination of premium mahogany and stunning maple top adds an overall richness in its dynamic resonance, not to mention a far more seductive look. But make no mistake, the Majesty Tiger Eye is still a precision build, and you don’t just play on this guitar, you fly on it.

The insanely flat 17– inch fingerboard radius is a supersonic runway for take off, with unfettered access to the 24th fret from its precisely contoured and shallow neck profile. It allows me to play “above my talent level” in just about every style possible, and because of its ergonomic design, every knob and switch is thoughtfully located to be fluidly engaged. The new DiMarzio pickups dial back in-your-face power for rawness, with a clear upper midrange snarl for the Dreamcatcher, while the Rainmaker has a throatier vintage response. Between the DiMarzios and the piezo system, the range of electric and acoustic tones are captivatingly enticing. It was easy and inspiring to quickly craft acoustic parts and bang out electric riffs all in one sitting and on one guitar. It’s a Majesty that’s not just a want, it’s a need.

● The Majesty Tiger Eye features a mono/stereo output jack for splitting the piezo signal separately to an amp or preamp when used with a TRS cable.

● The DiMarzio Rainmaker and Dreamcatcher humbuckers are raw and remarkably articulate, while the piezo bridge pickup can be combined to offer a vast array of acoustic/electric tones or pure piezo acoustic-like sound.

● THE BOTTOM LINE For its streamlined beauty and ergonomic design, the Ernie Ball Music Man Majesty Tiger Eye is the most graceful Majesty EBMM has produced thus far, making it an unrivaled instrument for dextrous playing and tonal possibilities.