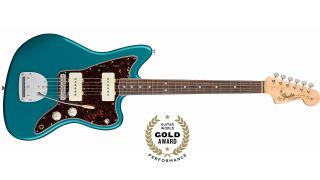 While The Fender Strat and Tele will always be timeless classics, the Jazzmaster arguably is one of the coolest solidbody guitars Fender ever produced. The reason is partly due to the fact that its original intended audience — jazz guitarists — mostly ignored the instrument and instead it became the favored ax of various riffraff over the ensuing decades: surf and garage band guitarists during the Sixties, punk and new wave players during the Seventies, alternative rockers during the Eighties and grunge musicians during the Nineties. With the aptly named new “American Original” series, Fender has resurrected the Jazzmaster in all of its original glory with just a few tweaks to appease modern players. Forget spending a fortune on a battered vintage model — the American Original ‘60s Jazzmaster delivers the classic tone and look of the real deal with modern playability at a down-to-earth price.

FEATURES With the American Original ’60s Jazzmaster, Fender went all out replicating the finer details of a Sixties Jazzmaster. It has the requisite alder body with a gloss nitrocellulose lacquer finish and maple neck with a rounded “C” profile and gloss nitrocellulose finish, rosewood fingerboard with mid-Sixties style 1-ply white binding, flatter 9.5-inch radius, 21 vintage tall frets, 25.5-inch scale length and even a vintage-style slotted truss rod nut that is adjustable at the heel instead of above the nut. The electronics are equally period correct and impressive, including a pair or Pure Vintage ’65 Single-Coil Jazzmaster pickups and the Jazzmaster’s distinctive lead/rhythm circuit incorporating traditional master volume and tone knobs for the lead circuit and thumbwheel volume and tone controls for the neck pickup only, which is the only active pickup when the sliding switch is set to the rhythm setting. Hardware includes the awesome and under-rated vintage-style floating tremolo with tremolo lock button, vintage-style Fender Deluxe tuners and a four-ply tortoiseshell pickguard. The guitar ships in a brown vintage-style G&G case.

PERFORMANCE The American Original ’60s Jazzmaster delivers all of the classic Jazzmaster tones we all know and love, from the Ventures to Tom Verlaine and Johnny Cash to Elvis Costello. With those big single-coil pickups (which look similar to P90s but are entirely different), the Jazzmaster produces bigger, warmer tones that still generate plenty of desirable single-coil twang and sparkle. The slightly flatter neck radius is much more comfortable to play than the original’s round 7.5-inch radius, and the vintage tall frets are a little meatier and offer more accurate intonation. The tremolo makes deep dives a breeze and never goes out of tune.

● THE BOTTOM LINE The Fender American Original ’60s Jazzmaster is proof once again that Fender doesn’t make guitars like they used to — they make them better than ever. This classic revival certainly will inspire a new generation of players like the Sixties original did.