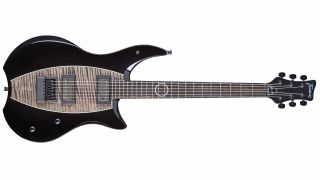 But by far their most interesting artist is progressive metal musician Devin Townsend (best known for the Devin Townsend Project, Strapping Young Lad and his work on Steve Vai’s Sex and Religion), who collaborated with Framus on an appropriately out-of-the-ordinary model called the Stormbender Devin Townsend Artist Series.

Fitting for a visionary, genre-defying artist like Townsend, the Stormbender seems like an unconventional instrument, but it makes perfect sense once you get to know it.

Although it's built from conventional tonewoods, including a mahogany body and set maple neck, the Stormbender features a generously thick 2-inch body with a carved and contoured top and back with a AA flame maple top inset in an oval section running down the middle of the body.

The neck has a 25.5-inch scale, and 22 extra-high jumbo frets installed with Framus’s Invisible Fretwork Technology (IFT) and Plek set up. The model is available in transparent Nirvana Black, and the tigerstripe ebony fretboard is minimally adorned with a Devin Townsend circle at the 11th through 13th frets.

The Devin Townsend Stormbender Artist Series boasts very aggressive and distinctive midrange, thanks to the 635Hz/3.4kHz (bridge) and 780Hz/3.4kHz (neck) peak frequencies of its pickups' humbucking and single-coil settings.

As a result, the guitar delivers a throaty, full-bodied sound that works equally well with high-gain and clean amp settings and also seems to pull more tonal variation and range out of standard amp tone controls. Even with a graphic EQ set to a scooped mid setting, the guitar’s tone remains robust and chunky.

Our example weighed a little more than nine pounds, but the weight is well distributed and the guitar feels much lighter when strapped on and played in a standing position. The fretwork is stunning, with a smooth, fast feel, and access up and down the neck is unrestricted, thanks to the neck heel that is contoured seamlessly to the body like a neck-thru design.

THE BOTTOM LINE: With the Stormbender Artist Series, Framus’s Teambuilt staff and Devin Townsend have joined forces to offer a solidbody guitar with style and sounds that are as innovative, appealing and distinctive as Townsend’s music.