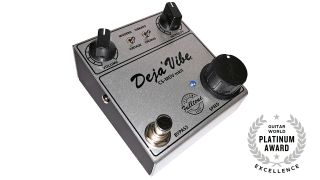 Unless you’re a passionate, dedicated follower of Michael Fuller’s work, you may be wondering why we’re reviewing a pair of Fulltone pedals that were introduced more than 20 years ago. Fulltone fans already know the answer, but for the rest of you, the reason is because Fuller is constantly making tweaks and improvements to his products, and whenever he makes significant upgrades or circuit changes he’ll bestow his pedals with further classifications such as mkII or V2. In 2018, Fulltone made serious upgrades to two of the company’s most successful and enduring pedals — the Full-Drive 2 and the Deja Vibe — that deserve the same attention as many new stomp boxes. If you’re already familiar with the Deja Vibe and Full-Drive 2, the Deja Vibe CS-MDV mkII and Full-Drive 2 V2 are well worth second looks, as Fulltone has preserved most of what players loved about these pedals to begin with and added a whole lot more to fall in love with all over again — or for the very first time.

FEATURES Both the Deja Vibe CS-MDV mkII and Full-Drive 2 V2 have significantly smaller footprints than their predecessors, making these pedals easy to fit on already-crowded pedalboards. The Deja Vibe CSMDV mkII provides the same set of controls as the CS-MDV-1, including volume and intensity, an oversized speed knob and mini two-way toggle switches for modern/vintage and vibrato/chorus settings. However, the Deja Vibe mkII now provides a significantly faster and slower speed range made possible by Fuller replacing the original potentiometers with a pair of custom-made Fulltone Opt-ocouplers possessing a range of 40 ohms to 5 mega ohms. The onboard and external speed control allows for linear performance without any abrupt changes in speed, making it smoother to dial in the desired effect speed. The external pedal jack now is compatible with almost any type of expression pedal, including units with 10K, 50K or 100k potentiometers. It also has greater volume output, allowing users to match or even boost levels when the effect is engaged. Unlike previous versions, the pedal has a Class A Jfet output section allowing up to 15dB volume boost and also lets it mate with other effects and high-gain amp settings seamlessly.

Fuller has made numerous changes to the Full-Drive 2 since it was first introduced way back in 1996, but whether you still prefer the original version or its various upgrades, chances are you’ll love the Full-Drive 2 V2 even more as it provides the best tones of previous versions and then some. Controls consist of full-size volume, tone, drive 1 and drive 2 knobs plus a new drive 2 volume control mini pot, two three-position mini toggle switches that provide various clipping modes (comp cut/vintage mode/flat mids and wide (MOSFET)/half-clipped/standard) and on/off and drive 2 footswitches. A pair of thumbscrews make it easy to remove the rear panel to change the 9-volt battery, or the pedal can be powered with an external 9-to 18-volt power supply.

PERFORMANCE Like the original Uni-Vibe upon which it is based, the Deja Vibe CS-MDV mkII uses four photoresistors and an incandescent light bulb to produce thick, deep chorus and vibrato effects. However, the Fulltone unit’s effects are a significant improvement with much greater warmth, fuller body and enhanced prominence that cuts right through a mix, as well as the added bonus of the wider speed range of the mkII version. These are indeed authentic Uni-Vibe effects, but they’ve never sounded better. No wonder Robin Trower has remained a faithful Deja Vibe user for nearly two decades.

The Full-Drive 2 V2 is still a “Tube Screamer killer,” boosting the most desirable midrange frequencies while also adding a vast palette of overdrive textures from gritty crunch to smooth, singing compressed distortion lead tones. The overdrive tones are impressively expressive, dynamic and musical, and the clipping mode toggle switches deliver all of the most beloved Full-Drive 2 tones from the past and then some. From the deepest blues to the hardest rock, the Full-Drive 2 V2 provides stellar overdrive and distortion textures that bring out the best of most single-coil and humbucker-equipped guitars.

● The Full-Drive 2 V2 includes a new drive 2 volume control as well as an extensive selection of clipping modes, including classic favorites
● The Deja Vibe CS-MDV mkII is significantly smaller than previous Deja Vibe pedals and offers wider speed and volume output ranges
● THE BOTTOM LINE Even if you already know or own the Fulltone Full-Drive 2 and/or Deja Vibe, the respective V2 and mkII versions of these pedals offer significant tonal and performance upgrades that make them the finest updated examples of them