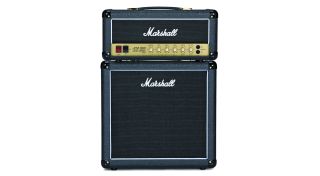 You can debate all you want, but nothing - and I mean nothing - comes closer to truly delineating the spellbinding power of rock and heavy metal guitar than a wall of Marshalls. Period. Evidenced by the many images of just about every famous guitarist from Angus Young to Jimi Hendrix and countless others who had endless piles of Marshall stacks behind them, it’s crystal clear Marshall has forever ingrained itself as an iconic brand for its timelessly elegant and imposing design.

Why? Because any dilettante with a guitar who dares to stand in front of such massive Marshall firepower can automatically (and somewhat deceptively) inherit the gravitas of being transformed into a guitar hero. Needless to say, Marshall would never have survived on looks alone, which is why the thunderous Marshall sound has been revered throughout its range of renowned amplifiers for more than 50 years.

So, as much as I still get a thrill of playing through and looking at them, I realize my Marshall heads and cabinets are way too loud and heavy to lift, so what to do without attenuating them? Well, Marshall, keenly on the forefront of delivering what players (myself included) need, has introduced the Studio Series, a downsized and manageable power trio of Marshall’s most legendary amplifiers consisting of the Studio Vintage, Studio Classic and Studio Jubilee.

All are switchable between 20 and 5 watts, available as a 1x10 combo or a head and - even cooler - miraculously preserve Marshall’s natty aesthetic in a shrunken-down replica. For this review, I took a look at the Studio Vintage SV20H and Studio Classic SC20H heads with their matching 1x12 cabinets, and quite honestly, hearing both amplifiers is like hearing the history of Marshall amplification from two decades in an abridged version, while still getting the whole story.

There’s no channel-switching or reverb to be had here; these are lighter, scaled-down remakes of notable vintage Marshall heads. The Studio Vintage SV20H is based on a four-input, two channel, non-master volume 1959SLP Super Lead 'Plexi,' while the Studio Classic SC20H is derived from a single-channel, High/Low input, master volume JCM800 2203 Marshall. Both heads look damn near authentic, too. Each head has its own period-correct brushed gold or plexi-style panel, control layout and orientation, power/standby switches and indicator lights like their original counterparts - even right down to the proper textured tolex and colored piping.

What the SV20H and SC20H share in common is they are dual EL-34 tube powered, with three ECC83 preamp tubes, a rear panel with multiple speaker-outs, unbalanced D.I. output and a series effects loop with a bypass switch. The standby switch rests in the center position on both models, with the full 20 watts of power engaged when clicked downwards, or flicked upwards to use the power reduction technology to bring the amp down to a comfortable 5 watts.

I’ve owned a few JCM800 heads, and the SC20H took me back to what it felt like to hear a Marshall 2203. At 20 loud watts, the SC20H doesn’t hold back any in-your-face crunch or volume when plugged into the High Sensitivity input and cranking the pre-amp gain. The tone is pure Sunset Strip hard rock, West Coast heavy metal and Bay Area thrash - a signature sound of Marshall heat that mixes crumbly overdriven saturation with high-end sizzle that makes plucked notes pop out along with a tight bottom end for rhythmic chugging and muting. Cleans work well here too, but are better served through the Low Sensitivity input, which also works superbly with pedals.

I loved the SC20H so much that I almost felt I’d be disappointed with the SV20H. On the contrary, the SV20H blew me away with its smoother and more refined overdriven tones. Plugging into input 1 on the High Treble channel, things get very crunchy fast, with little clean headroom. It’s a glorious growl with midrange bark that cuts and sounds fuller with more compression, but I had to dial back the presence and treble EQs to curb some brightness. The real fix was to link the channels by patching another cable from the High Treble low input 2 channel to the Normal channel 1. Then I blended in the Normal channel’s volume to enhance the bass and low mid frequencies, and added cleaner headroom to its warm power amp drive.

All in all, the SV20H is so intoxicatingly touch-responsive I may never go back to a high-powered big box amp. Dropping down to the 5-watt setting certainly tames the volume but not by much, but welcomely maintains the tone on both amps. I also found that the Celestion V-Type speaker in the matching open back cabinets perfectly compliments either head with a focused tone that envelopes the room.

Both amps are incredible achievements that capture the distinctive tube tone and crunch from the originals, and no preset on a digital amp can ever come close to matching their sonic complexity.

• The SV20H and SC20H feature power-reduction technology enabling you to switch between 20 and 5 watts without the need for an attenuator.

• The SC20H is based on Marshall’s JCM800 2203 and captures the crisp overdrive and distortion of that legendary amp.

• The SV20H has that inimitable Marshall 'Plexi' tone, taking its cues from a 1959 SLP with a rounder, bluesier and more defined crunch.

• The companion 1x12 cabinets (SC112 and SV112) match the styling for each head and feature a 70-Watt Celestion V-Type speaker.

THE BOTTOM LINE: The Marshall Studio Vintage SV20H nails hallowed Plexi tones with a mighty roar, while the Studio Classic SC20H is a junior JCM 800 that rips for hard rock and metal. For their size and mammoth tone, these Marshalls are pure magic.