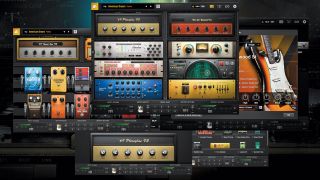 Software updates are commonplace these days, but it’s much more uncommon for an update to introduce a radical new feature that’s so innovative that most companies opt to make it available as an entirely new product altogether instead.

The Guitar Match feature alone should be enough to make an upgrade or new purchase irresistible, but when one considers the incredibly deep range of available amps and effects that come along with this second-generation version, the BIAS FX 2 is truly a must-buy.

The Elite package is highly recommended as it provides 18 Guitar Match instruments compared to six (Professional) or two (Standard), as well as 100 new amps, 100 new effects and 200 factory presets, plus there’s the exclusive new Fuzz, Time and Harmonizer Modelers.

If you’ve tried or own BIAS FX, you already know that the amps and effects kick ass. The new amps and effects, as well as the expertly programmed and highly usable presets, are so good that you may never want to go back to playing a 'real world' amp or pedalboard again.

But the ultimate mind-blower is the Guitar Match feature, which can transform any one of your favorite guitars into a Strat, Tele, Gretsch, ES-335, Charvel and much more. The initial setup takes a bit of time but is simple: choose a favorite guitar, match its body style and pickup configuration, analyze notes at different pickup settings and fret positions, and you’re good to go. No special pickups or processors are required.

My experience of playing the mid-'60s SG that I’ve owned for 45 years and hearing it nail the sounds of a 1952 Telecaster, Sixties Strat and Gretsch hollowbody was utterly surreal. The days of hauling several guitars to gigs and sessions are now truly numbered.

● The all-new Guitar Match feature converts the sound of your favorite guitar into up to 18 different guitars with stunning realism and distinctive character.
● A completely reengineered, high-resolution DSP delivers amps and effects with vastly improved dynamics, responsive and realistic detail.

The Guitar Match feature alone makes BIAS FX 2 worth the price, but when added to the stunning new amps and effects it offers, it is truly a must-buy for guitarists who want to explore an entirely new world of expressive power, freedom and convenience.