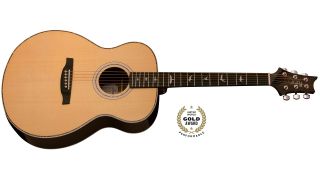 Back in the “Golden Era” of the acoustic guitar — I'm talking about the 1930s here, folks — the differences between “budget” models, like a Gibson L-00 or Martin OOO-18, and high-end models, such as the Gibson Nick Lucas Special or Martin OOO-45, were mainly a matter of wood quality and cosmetic embellishments like pearl inlays. In terms of tone, all of the models sounded excellent, with only subtle differences in the expanded tonal complexity of the more expensive guitars.

In more recent times, the schism has widened and the difference between a sub-$1,000 acoustic and a boutique guitar that costs thousands of dollars is much more dramatic. However, PRS acoustics have much more in common with the Golden Era philosophy. Their affordable SE series instruments perform well beyond the usual standards of other acoustics in their price range, delivering tone that’s comparable to their Private Stock acoustics. While these days it’s not difficult to find a good-sounding acoustic for less than $1,000, PRS SE acoustics offer guitarists sound and playability that are elevated to an entirely different league.

Cosmetically, the SE Angelus AX20E and SE Tonare T40E differ slightly, with the latter being the fancier of the two with its tiger acrylic purfling and rosette and cream body binding compared to the former’s simpler black and white binding and rosette. The Fishman GT1 electronics are virtually “invisible,” with only a small block for the output jack and battery compartment access mounted on the lower treble side and rotary volume and tone controls mounted above the low E string inside the soundhole.

PERFORMANCE Whenever I receive an acoustic guitar for review, I prefer to approach the instrument “blind” and guess the price before doing further research. After spending a few hours playing the PRS SE Angelus AX20E and SE Tonare T40E and making my best guess, I was shocked (in a very good way) to discover that my price estimates were $1,000 to $1,200 more than the street prices of these guitars (and that was with the knowledge that these are SE series instruments). The refinement and complexity of tone in both instruments is simply unheard of in the price range that these guitars sell for.

The T40E is an expressive, dynamic instrument with outstanding bass-to-treble balance that’s powerful, sweet, and rich thanks to its ingenious combination of X-bracing and classical fan-style bracing. The cathedral reverb-like resonance is stunning. This model is by far the best fingerstyle instrument I’ve played in the sub-$1,000 price range, and it even outshines guitars I’ve played costing three to six times as much.

The AX20E is also a great fingerstyle instrument, but its more focused range and output makes it better for strummed rhythm playing and more aggressive flatpicking techniques. Whereas some mahogany guitars can sound overly warm, the AX20E is brilliant and lively with rich harmonic overtones and the depth of overdubbed acoustic layers. The Fishman undersaddle pickup delivers natural acoustic tone with little embellishment — perfect for these guitars as they sound awesome on their own.

● The SE Angelus AX20E is a cutaway model with mahogany back and sides and X-bracing, while the SE Tonare T40E is a full-body model with ovangkol back and sides and hybrid “X”/classical fan bracing.
● Both models feature solid Sitka spruce tops, mahogany necks with ebony fingerboards, bone nuts and saddles, and built-in Fishman GT1 electronics.
● THE BOTTOM LINE Delivering responsive dynamics and sweet, complex harmonics, these new SE acoustic models from PRS perform at an elevated level comparable to much more expensive boutique instruments but with an entry level price tag.