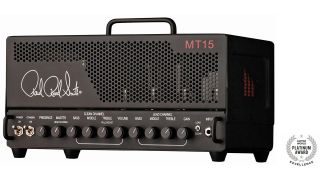 There are a lot of great-sounding mini and “lunchbox” amps on the market these days, but, as good as many of these products often are, most seem like they were designed while “You Can’t Always Get What You Want” by the Rolling Stones was playing in the background. Models that have excellent high-gain distortion tones often lack strong clean tones and vice versa, while other models may compromise key performance features to compensate for smaller chassis sizes. The response from manufacturers is usually a bemused shrug followed by a recommendation for a full-size amp they offer.

When PRS and Mark Tremonti joined forces to design his first signature amp, Tremonti apparently said to hell with compromise. As a result, the PRS Mark Tremonti MT 15 is a lunchbox-style amp head that is truly equivalent to many larger amps in every way, other than its smaller size and — best of all — lower price. The MT 15 is a two-channel amp with two fully independent and individually voiced channels and several other features not commonly found in this class of amps. The MT 15 is versatile enough to be the perfect studio workhorse, particularly when paired with the PRS MT 1x12 Closed Back speaker cabinet, but it’s also powerful enough to use on stage with a 2x12 or 4x12 cabinet.

FEATURES The PRS MT 15 is rated at 15 watts of output, but because its power amp section features a pair of 6L6 tubes, instead of the usual 6V6 or EL84 tubes used for most compact amps, it delivers both tone and volume levels that can compete with many fullsize 50-watt heads — even though it employs smaller transformers and lower plate voltages. Six JJ EC83S preamp tubes provide impressive amounts of gain that go well beyond competing lunch box amps as well.

Whereas most two-channel mini amps provide only one set of tone controls for both channels, the MT 15 offers separate sets of bass, middle and treble EQ controls for the Clean and Lead channels. Players can switch channels using the heavy-duty footswitch that ships with the amp or select channels using the mini switch on the amp’s front panel when the footswitch is not connected. The Clean channel also has a boost function that is engaged by pulling out the channel’s treble knob, and the Lead channel has its own gain control in addition to the EQ section. The master volume controls the output of the Lead channel only, and the presence control (another feature uncommon for mini amps) is shared by both channels.

Rear panel features consist of ¼-inch send and return jacks for the FX loop, a full/half power switch for 15- or 7.5-watts of output, probe jacks and an adjustment knob for setting proper bias, a single 16-ohm and pair of 8-ohm parallel speaker output jacks and a ¼-inch jack for the included footswitch. The PRS MT 1x12 Closed Back speaker cabinet is designed for use with the MT 15 head. It features a single Celestion G12T-75 16-ohm 12-inch speaker mounted in an oversized birch plywood cabinet that delivers tight, enhanced bass response and rich, resonant treble.

PERFORMANCE Without a doubt, the PRS MT 15 is the biggest-sounding lunchbox amp I’ve ever played, and I can attest that I’ve played at least 90 percent of the models out there. The 6L6 tubes and meticulously dialed-in circuit are the key, delivering crisp pick articulation, punchy percussive attack and impressive bass that will tremble your trouser legs, when playing the amp through a large speaker cabinet. The high-gain tones sound killer with dense layers of harmonically rich distortion and sophisticated detail, and the distortion tones get bigger, tighter and more forcefully powerful as the master volume is turned up.

However, I was even more impressed by how punchy, big, and three-dimensional the clean sounds are, particularly with a delay unit connected to the FX loop. The Clean channel maintains impressive clean headroom even with the volume control turned all the way up on the 15-watt output setting, and the volume level of both channels almost match when both are turned all the way up. Engaging the Clean channel’s boost allows the Clean channel’s output level to match even closer while adding overdrive grit that’s delightfully raunchy without being too dirty.

• The power amp is driven by a pair of 6L6 tubes to provide the enhanced bass, detail, articulation and harmonic complexity of a much larger amp

• THE BOTTOM LINE The outstanding tones of the MT 15’s Clean and Lead channels and their truly independent character would make this amp a bargain at twice its price, but for $649 it is a best-buy for true aficionados of modern hard rock guitar tones.