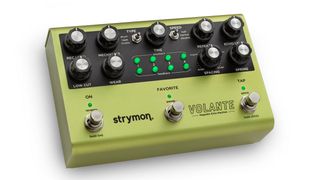 For the most demanding delay connoisseurs, Strymon has delivered some of the industry’s most tantalizing effects over the last decade.

From the El Capistan, which proved that digital technology could accurately replicate classic tape echo effects - quirks, imperfections and all, to the TimeLine, which introduced an entirely new standard for studio-quality digital delay in a pedal format, Strymon has consistently provided guitarists with outstanding musical tools that are unlike anything else available on the market.

The company's latest delay pedal, the Volante Magnetic Echo Machine, seems like an expanded version of the El Capistan at first glance, but by providing three distinct categories of echo (drum, tape and reel-to-reel studio), stereo multi-head delays, a spring reverb algorithm and more, its sonic capabilities go much further.

The reason why Strymon calls the Volante a 'Magnetic Echo Machine' is because it accurately reproduces the distinct sounds and effects of a drum echo unit (a wire recorder that employs a rotating metal drum and four playback heads, like the Binson Echorec) in addition to beloved tape echo (a la the Maestro Echoplex and Roland Space Echo) and hi-fi studio tape echo (created using pro-quality reel-to-reel recorders) effects.

In addition to providing users a selection of three very different types of echo (selectable via the Type switch), the Volante also includes controls for Record Level (reproduces the analog gain of a signal fed to a record head), Mechanics ('flaws' like speed fluctuations, tape crinkles, splices and more), Wear (mimics the full-frequency of 'fresh' tape to the murky sounds and muted high-frequencies of worn tape) and Low Cut (for adjusting the low-frequency EQ of repeats) that enables users to dial in anything from the sounds of a factory-fresh echo unit to those of one that’s seen several decades of frequent use.

Other top panel controls include Time, Repeats, Echo Level and Spring (reverb level), as well as an unusual Spacing knob that 'moves' the virtual playback heads in even, triplet, 'golden' (non-overlapping) and 'silver' (non-overlapping biased towards quarter note) spacing.

Also, the Spacing control is continuous, morphing between its four labeled settings throughout its range of travel. The Speed switch’s three settings - half, normal and double - replicate both delay range and fidelity of tape or a wire recorder’s spinning drum at the corresponding speeds.

An array of eight illuminated push-buttons allow users to engage any of the four playback heads per stereo channel individually and at full or half volume (top row), and engage or disengage feedback and adjust panning for each head (bottom row).

Volante’s three footswitches consist of an On switch, Favorite switch that stores and recalls up to eight presets and Tap switch for tapping quarter note intervals. When the pedal is in Sound on Sound mode, the footswitches perform reverse and infinite hold (On), pause (Favorite) and splice and hold functions (Tap). Rear panel features include an instrument/line switch, individual stereo left and right 1/4-inch inputs and outputs, an expression pedal jack, MIDI In and Out and a micro-USB jack.

While I’ve been impressed with several digital effects pedals that model classic devices, like the Binson Echorec and Roland Space Echo, as the owner of various original units, I can attest that no pedal can accurately duplicate their nuances, personality and idiosyncrasies - except the Volante.

This pedal perfectly delivers the ethereal depth of my favorite Space Echo, as well as the odd and alluring grunginess of an Echorec. The studio tape echo effects are stunning as well, providing everything from thick Fifties-style Sun slap-back to pristine Seventies-style Roy Thomas Baker repeats.

Volante excels at duplicating numerous classic echo effects, but it also produces some unique modern tones and textures as well. The spring reverb is a very welcome addition that adds a lush sense of space, and being able to adjust the head spacing provides creative flexibility that just doesn’t exist on the original units.

Considering that Volante provides more than three times the amount of effects as the El Capistan and includes a built-in Favorite switch, but only costs a little more than the El Capistan, it’s an incredible bargain. Even better is how it provides an abundance of classic echo effects from the sounds of a pristine new unit to the distinct but lovable flavors of worn devices without the expensive maintenance costs or hassles of locating replacement tape.

● The Type switch provides access to three very distinct classic magnetic echo device effects: Drum, Tape and Studio.
● The Rec Level, Mechanics, Low Cut and Wear control knobs allow users to dial in sounds that range from pristine clean to the grungy tones of a worn unit.
● Each of the four virtual playback heads can be engaged individually to generate complex rhythmic effects.
● A built-in spring reverb adds depth and a vivid sense of space that enhances the textures and realism of the echo effects.

Whether you want to replicate truly accurate drum, tape and studio tape echo effects from pristine to well-worn, or are looking for lush, complex new echo textures to explore, the Strymon Volante provides a wealth of truly stunning effects.