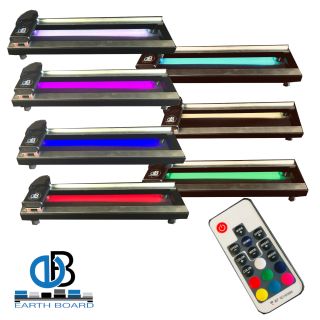 Last year, Rare Earth Music launched Earthboard, the first magnetically designed and powered pedalboard. The company also launched Earthboard LifeLine, a special Tether and Backup Boot combination that either allows multiple Earthboards to be connected and powered by a single rechargeable battery, or moves an oversized pedal off the board and powers it on the floor using the same battery.

Also releasing at Summer NAMM, the patented Earthboard Remote Control LED Light System is a new option that can be installed on the M-series boards. Using a remote control, the user can change colors on the fly — between songs or sets — as well as dim the lights, or set specific flashing patterns of one or multiple colors including white, blue, red, green, yellow, magenta and blacklight. Partner Mark Bradley says, “The addition of the remote-controlled LEDs will give a player even more flexibility and variety when putting on a show.”

Both of these new features are options that can be added to any new order, or retrofitted to already purchased Earthboard Pedalboard Systems. Retail installation for the Cross-Board Patch Cable is $30, while the Remote-Control LED Light System installation is $40.

Check out Rare Earth Music at Summer NAMM at booth #960.

For more, head over earthboardmusic.com.