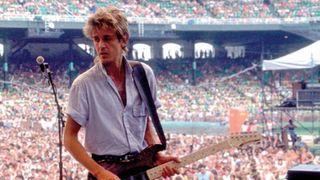 Razor-sharp, ultra-clean funk guitar tones were a prominent element of pop music in 1983. These distinctive sounds could be heard on singles released by David Bowie, Talking Heads, Duran Duran, Echo and the Bunnymen, INXS, Kajagoogoo, Greg Kihn, Naked Eyes, Spandau Ballet, Tears for Fears and dozens of other artists. One of the greatest and most enduring examples of this era is the Fixx’s Reach the Beach album, particularly their best-selling single “One Thing Leads to Another,” which still sounds as infectious and cool today as it did back then.

Fixx guitarist Jamie West-Oram generally relied on Fender Stratocasters during this period (he later switched to custom Strat-style guitars built by John Suhr), but on “One Thing Leads to Another” he played an Ibanez Blazer BL-100. West-Oram mentioned this detail in interviews, and he can be seen switching from a Strat to the Ibanez in early-Eighties live concert videos when performing the song, then switching back to the Strat again at the end. With its three-single-coil-pickup design, the Ibanez Blazer isn’t much different from a Strat. The secret reason it became West-Oram’s weapon of choice for this particular song is, unlike a Strat, it has a phase switch (which only affects the tone of the bridge/middle and neck/middle settings) that produces an even brighter and more percussive tone that cuts through the mix like a knife — just what the rhythm guitar part needed to drive it over the top.

Copious amounts of compression courtesy of an MXR Dyna Comp really tie the sound together like the Dude’s rug. Without compression, the chords can sound sloppy, but with it each note rings out loud and clear like a bell. Engineer Stephen W. Tayler squashed the guitar tone even further with a dbx 160, but the Dyna Comp does the heavy lifting up front. West-Oram also used an MXR Stereo Chorus with a moderate width (depth) setting to provide subtle modulation that restored body to the tone while enhancing the treble shimmer and shine. The chorus pedal’s outputs were split to a pair of Marshall 2014 50-watt 2x12 combos dialed in to pristine clean settings with a slight midrange boost and the bass, treble and presence controls near dead center to maintain body.

TONE TIP: The Roland Jazz Chorus amp provides a true stereo chorus effect while eliminating the need for a second amp. Use the Manual chorus setting and keep the Depth setting low to produce a very subtle modulation effect.