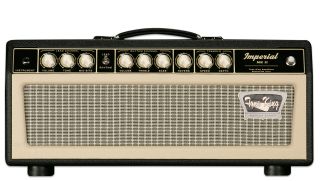 The MKII head features hand-wired board construction for improved midrange and highs, a rhythm channel tuned for vintage “blackface” tones with a smoother breakup, and Mid-Bite control on the Lead channel, which tightens the low end for added punch.

The Tone King Imperial MKII is available in Turquoise/White, Brown/Cream, Cream and Black/Cream finishes. No price for the Imperial MKII has yet been made available, but our pals at MusicRadar estimate it'll be around $2,500.