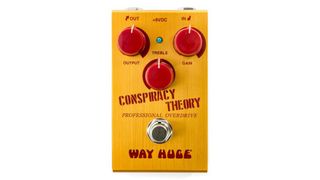 Way Huge has unveiled the Conspiracy Theory, a new overdrive based on the legendary Klon Centaur.

The single-wide amp driver promises to capture the Klon’s legendary tones and vibe, from the sensitive gain range and tonal sweep to the gold-colored metal enclosure.

The Conspiracy Theory boasts knobs for Gain, Treble and Output, and features true bypass switching and 9V power supply operation. As for how closely the pedal tracks the sound of the Klon, that remains to be seen upon its release. But at the very least, the size of the unit, as well as its price tag, are both noticeably smaller.

The Conspiracy Theory will be available for $129.

For more information, head over to Way Huge.