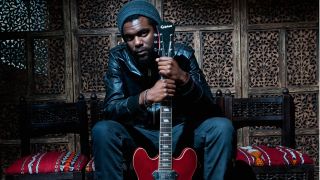 For a genre so deeply and tragically entrenched in history – stretching back one-and-a-half centuries – the blues finds itself in a defiantly rude state of health in 2020.

The world is a very different place now, and still far from perfect, though truth be told the potency of pentatonic scales, 12-bars and flat fives to the human ear has never waned, largely thanks to the musicians keeping this form of expression alive.

Here, we want to celebrate the players who have been doing precisely that – whether it be dedicating their lives to faithful recreations of the sounds of the past or finding new ways to reinvent a very classic formula by introducing country, jazz or hip-hop tonalities.

As an art form, the blues has never been more diverse and musically rich, which means there’s no shortage of sounds and talent to take inspiration and learn from.

And with that, we present 20 of the best blues riffs to land in the past decade or so, with lessons on how to play some of our faves.

Master of reinvention and arguably the most dependably brilliant guitarist to walk the earth, Jeff Beck won his last Grammy in 2011 thanks to this absolute gem of a riff. It’s built off the D Mixolydian scale, sticking to the minor pentatonic notes from the same key save for the addition of a major 3rd.

2. Joe Bonamassa – Dirt In My Pocket

The fourth track from 2007 fan-favourite Sloe Gin could very well be JoBo at his heaviest, making full use of an open-E tuning, a slide and a fair amount of overdrive. The usage of a major 6th in addition to the 2nds, 3rds and minor 7ths found in the riff is what gives it a Dorian flavour.

Richie plays this riff using the first and second positions of the B minor pentatonic scale. The doublestops on the second and third strings borrow from the Dorian mode, too. Richie tends to play the notes on the sixth string with his thumb, so the opening octave shapes are played by the thumb and third finger.

This riff is made up of a lot of parts and techniques from string skips to slides to vibrato to bluesy bends so break this one down into chunks to help memorise it more easily. Although we’ve played the riff with a pick, you can also play the riff fingerstyle as Richie does!

On this track, Derek gets some extra mileage out of his 7th chords, switching between playing bass/root note rhythms with his thumb and spelling out dominant chords with his fingers. It would make a great exercise to practice your fingerstyle blues.

“There’s a secret language to the blues, you need to say it without saying it,” the ZZ Top singer/guitarist told TG around the release of his second solo album. Its opening track does exactly that, making use of the classic boogie shuffle Billy built his career on.

This riff starts with some Hendrix-style chord fragments which you can play with a barre at the 5th fret and your remaining fingers to add the chord changes. Gary lets the notes ring together and creates a nice dissonance between these close intervals.

The second half of the riff is more of a Led Zep-style rock riff with the F root note played with palm mutes and even downstrokes, and the Ab and Bb powerchords on the middle two strings.

This track from what would be Gary Moore’s final solo album cheekily nods to his Thin Lizzy years and is built off the A-minor pentatonic scale. Nine years on from his passing, the Belfast blues hero’s influence is felt in every corner of the world.

Led by sisters Rebecca and Megan Lovell, Larkin Poe have become one of the most exciting names to emerge in blues over recent years. On Blue Ridge Mountains, Rebecca holds the chords and sings while Megan matches her melodies on lapsteel.

“Josh is one of my favourite musicians on the planet,” Joe Bonamassa once stated, praising the American singer/guitarist’s ability to “transcend the boundaries of blues into a genre of his own”. This track from his Over Your Head album reworks familiar E minor pentatonic notes into an unusual swing.

10. Erja Lyytinen – Snake In The Grass

Finish singer/guitarist Erja Lyytinen’s opening riff to Snake In The Grass doesn’t feel especially remarkable – at least until you get to its final bar, where she climbs back down the C blues scale in a way guaranteed to turn heads and raise eyebrows. It’s a great example of using time divisions to catch listeners off-guard.

On his 1974 hit Bridge Of Sighs, Robin Trower popularised the sound of a Fender Strat going through a vibe pedal. All these years later, on tracks like this, his recipe for gripping, psychedelic blues is clearly one that still works.

12. Joanne Shaw Taylor – Who Do You Love

This riff is based in the first position of the B b minor pentatonic scale and primarily uses the middle two strings. The first phrase is a pull-off from the 8th fret to the 6th on the fourth string, then moves down to the 8th fret on the fifth string.

There is a muted note which acts as a punctuation mark in the rhythm – keep your fingers resting lightly on the strings without pressing down and pick as normal. At the end of the riff, slide up to 13th fret on the third string. Add some vibrato on the longer notes for blues ‘feel’.

Eric’s guitar is tuned to drop C#, but we’ve recorded the video in drop D, so you can simply tune your sixth string down a tone rather than retuning your whole guitar. The riff starts with an open powerchord on the lowest two strings, followed by a melody on frets 5, 3 and 7 of the fourth string.

Eric’s playing is very lyrical and emotive, so the best way to learn this phrase is to think of the words he sings ‘how does it feel’ and place each note on the syllables. The riff repeats four times, with a variation the third time.

There has no shortage of young bands trying to emulate the vintage sounds of the past in recent years, but few have pulled it off with the conviction and authenticity of Sweden’s Blues Pills. This 60s-style G minor jam off their second album is one of their finest.

This ballad from one of Slowhand’s more recent studio albums uses dominant doublestops against an A root note to great effect. It’s an old trick – similar usage of intervallic pairs, usually 3rds or 6ths, stretches throughout his entire discography – but it sure works.

As one of the elder statesmen of the genre – now fast approaching his 84th birthday – Buddy Guy shows no signs of tiring from what he does best. This track from 2003’s Rhythm & Blues swings hard in A minor and makes good use of that all-important b5th.

Though he’s generally considered more of a jazz musician, Larry Carlton’s blues albums – particularly 2003’s Sapphire Blues and its 2006 follow-up Fire Wire – are the mark of a man with impeccable taste. The up-tempo grooves of Inkblot 11 are reminiscent of Stevie Ray Vaughan at his funkiest.

Tyler tunes his guitar down to Eb, but we’ve shown the riff in standard E tuning so you don't have to retune. This riff uses 1st position of the F# minor pentatonic scale with first finger at the 2nd fret. The first phrase is played as a pick-up bar leading into bar 1.

Use your third finger to bend the third string, then use your first and third fingers to complete the phrase. The rest of the riff is played with straight 16th notes on the sixth string using the 2nd and 5th frets and an open string. Play with even, alternate picking throughout.

Despite reinventing himself as more of a bluesman as the years have gone on, it’s this riff from John Mayer’s breakthrough debut album Room For Squares that showcases him at his best – breathing life into simple chords with complex fingerstyle rhythms.