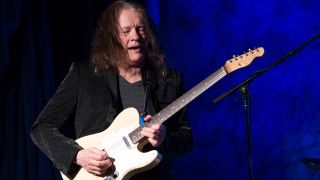 Superlocrian, otherwise known as Diminished Whole-Tone scale, or Altered scale is the 7th mode of Melodic Minor. The Superlocrian mode is used a lot in jazz and fusion music by players like Mike Stern, Scott Henderson and Robben Ford. It has a very unusual construction as all of the intervals are flat: 1-b2-b3-b4-b5- b6-b7. So you could find the positions on the fretboard by playing a Major scale shape and moving the root notes up one fret.

To gain an understanding of how the scale relates to harmony, our first example shows the notes harmonized using 3rds to create four-note chords, with root notes along the sixth string. This is the same as playing Ab Melodic Minor, only here we are starting from the 7th degree.

Our second example is from the Altered perspective, where the scale is viewed as over a Dominant chord, rather than Minor. The presence of the b4 allows for this trick, as this is enharmonically the same as a major 3rd. If we extrapolate this further and swap some more of those ‘flat’ interval names for ‘sharp’ interval names we can spell out the same scale like this: 1-b9-#9-3-b5-#5-b7.

Exactly the same notes, but different interval names. The reason for this is now we have a Dominant 7th chord (1-3-b7) with a selection of Altered extensions (b9-#9-b5-#5). As you can see in the tab example, we can start with a G7, then add various combinations of those extensions to create different ‘altered’ chords. Often in jazz chord charts, you will see ‘G7alt’, which means ‘play an altered chord’; the exact altered chord is left to your interpretation.

Example 3 starts with G7#9, a chord type commonly referred to as the ‘Hendrix chord’ because he used it in songs like Purple Haze. The construction of the chord is a Dominant 7th with an added #9 interval. The #9 is essentially the same as a minor 3rd (b3rd), so there is an inherent Major vs Minor tension within the chord, which makes Superlocrian the perfect soloing choice.

Here we have a two-notes-per-string lick based around the 7#9 chord shape. Example 4 will help you really appreciate the presence of both Major 3rd and #9. Our #9 is essentially the same as saying ‘minor 3rd’ (b3rd), so here we have a G7 arpeggio with a b3rd (or #9) added. This creates an interesting and exotic sounding effect.

The fifth and final example is a fusion lick played over a Minor II-V-I, using a combination of m7b5 arpeggio notes. The Altered scale is used over the G7 chords and then we resolve to the Cm7.

First learn the root notes along the sixth string. The intervals are b2-b3-b4-b5-b6-b7. To play through the chords, you will need to switch between first, second and third fingers so focus on making the finger changes as smooth as possible. Using your thumb to fret the sixth string notes is also acceptable.

Play the G7#9 chord and take note of the frets you are using, as the lick follows those same frets, with an added 8th fret on each string. This can actually be thought of as shape 1 of C Minor Pentatonic, with the root note moved down a fret to B (or Cb). This is a great way of accessing the Superlocrian sound.

Start with your second finger on the 15th fret then use the first finger to shift between 13th and 14th frets. Continue by using first, second and third fingers to navigate the rest of the shape. Alternate pick each note and practice playing up and down the shape while letting the notes flow evenly.

This lick uses lots of interval jumps and string skips, so practice it in smaller eight-note chunks in order to gain fluency between the sections. Next link the chunks together and play the whole lick using either alternate or economy picking, whichever you feel more comfortable with.

This lesson has been brought to you by Rockschool.