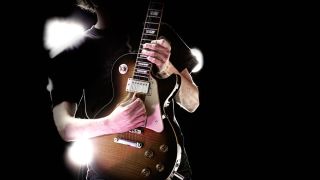 We've previously looked at some of the various (and sometimes unlikely) places where blues influence finds its way, and this month we continue that tradition.

During the '80s, guitar solos moved in an increasingly technical, even academic, direction. The blues element was less prevalent in the output of players such as Steve Vai, Joe Satriani and Yngwie Malmsteen. On the flip side, Gary Moore, John Sykes and Zakk Wylde combined modern, flashy playing with a recognisably ‘blues’ feel.

The then ubiquitous hot-rodded locking whammy- equipped Superstrats were/are great fun and can work well here - Gary Moore certainly had a flirtation with them - but the players we’re talking about here generally stuck with a more ‘classic’ Les Paul/Marshall type rig, as Slash also did in the latter part of the decade...

The four examples here are taken from a single solo and can be joined together to make a complete transcription, so feel free to treat this as a whole solo or just take the ideas that appeal.

There are some tricky fast sections that can be open to interpretation. These are very much from the Gary Moore school of thought: Gary once said his speed came from “pure energy” rather than slick technique.

In no way did he lack finesse but rather he phrased in a very different way from players such as Guthrie Govan or Tosin Abasi. As you work on this, you’ll hear some imperfections in my original solo, but I didn’t want to do a dozen takes - or sneakily repair with punch-ins...

Tonally, this is high-gain. If you watch footage of Gary playing live, you’ll see how he would reflexively zero the guitar volume between phrases to avoid unwanted noise and feedback, particularly important when using vintage guitars with unpotted pickups!

Though there are some workouts for the picking hand coming up shortly, this first part of the solo is more about correct pitching and control over bends and vibrato. The second bar features some slow ‘John Sykes’ type wobble, which leads to a series of semitone bends.

In turn, this progresses to the first of our ‘flash’ sections. Working through slowly, you’ll see it is alternate-picked in a couple of descending groups of four, changing on the final note to ascending groups of six.

Beginning with the climactic note at the end of the first ascending run, this section takes a melodic turn via a fragment of E major scale and B major arpeggio (superimposed over the E chord), before building towards a classic Gary Moore/John Sykes style phrase.

We’ll be staying with this for a while, exploring various possibilities as we build towards another flurry at the end of the next example.

The first half of this example builds on the momentum established towards the end of the last phrase and accelerates further.

A lot of the picking here is not alternate but what you call ‘economy picking’. I’m brushing across adjacent strings, mixed with hammer-ons and pull-offs, with a couple of the notes sounded only by the hammer-on.

This takes a little after Zakk Wylde, with some held bends contrasting with rapid-fire palm-muted lower notes.

Though it’s the final phrase, this may make a good starting point if you’re hesitant about tackling some of the more flashy stuff. Some light palm-muting helps to control the articulation of a high-gain sound like this, even if you don’t make an obvious feature of it like Zakk.

The slide down the E string at the end makes as though joining in with the rhythm guitar after the solo!

Recorded live in 1984, this album captures Gary between the first phase of his solo career, culminating in Victims Of The Future album (1983), and about to embark on the much glossier radio-friendly production of Run For Cover (1985), before returning more to his blues roots later in the decade.

Check out the extended solos in this version of Empty Rooms, the super-charged blues of Cold Hearted, and the melodic but fierce soloing on Shapes Of Things.

After exiting Whitesnake rather mysteriously as the recording of their 1987 self-titled album drew to a close, ex-Thin Lizzy guitarist John Sykes was highly motivated to show he had actually been a significant part in its success.

This is the first of just two albums with this band - he is on ripping form on Riot, Valley Of The Kings and the title track. Honorable mention should also go to the solo on Out of Love, which influenced the example solo here.

Though this album has more than its fair share of bombastic guitars, there are particularly noteworthy solos on the title track, plus Mama, I’m Coming Home and Time After Time.

Zakk Wylde certainly seems to have taken that Gary Moore-style commitment to each and every note, with a bit of John Sykes panache for fast pentatonic runs, although he definitely has his own unique thing going on. Well worth stealing from, as the saying goes!