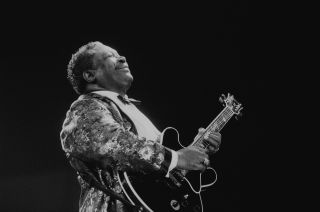 B.B. King is one of the most notable blues guitarists of all time, and for many reasons. Arguably the biggest of these is his distinctive lead guitar playing style—something many guitarists have emulated and learned from, and which has inspired just about every blues player since.

Here are five key features of King’s lead guitar playing. If you’re looking to emulate and re-create his style, start here. Even if you’re not trying to do that, these are still key concepts to great playing, so make sure you take them on board and learn from them in your own way.

Also known as “The Blues Box” or “B.B. King’s Blues Box,” there's a lot of information out there on this subject, so what we’re more interested in here is reducing the concept to its essence so it can be used in anything, and anywhere.

King often took a small group of notes, sometimes three, sometimes four, and treated that as his essential canvas. He effectively restricted his licks to phrases that were memorable, sing-able (more on that later) and expressive because they had to be (i.e., note choice is limited, meaning expression, techniques and rhythm must be used creatively).

These are three very important qualities in any music but especially in the blues, given that call and response, playing with, under or between vocal lines and expressing emotion are so central to the style.

Start small—how much melody can you make with just three (or even two) notes? Use your expression, techniques and phrasing to see what you can create.

B.B. King was famous for his vibrato. What makes it distinct from that of most other guitarists is that his fretting hand was not holding the neck of the guitar while he applied vibrato.

Depending on what you’re playing, you’ll basically always have either the neck of the guitar fitting into the palm of your hand with your thumb on top, or you’ll have your thumb flat on the back of the neck squeezing the neck between your thumb around the back and your fingers around the front.

Now, try playing a single note and adding vibrato, but without your hand in either of these familiar positions. That’s what B.B. was doing—waggling the finger and the entire wrist but without gripping the neck at all.

Take the essence of this and apply it to your playing in general—the point is that B.B. was doing what felt comfortable for him and finding his own means of expression (without, of course, sacrificing any sound).

This is by no means what a jazz guitarist would mean by an "outside" note—unusual extensions and altered scales and all that, well, jazz. Here, outside notes simply mean notes that aren’t in the major pentatonic or minor pentatonic scale.

You can hear this in action by playing a standard simplistic blues lick from the minor pentatonic or blues scale that finishes on the root note. Immediately before you land on that root note, visit the major 3rd, then finish on that root note.

It obviously runs deeper than this—particularly with B.B., who was also known for microtonal bends (i.e., moving a bend through smaller distances than simply a semitone). However, again the key here is to understand the essence of the concept—that it’s those notes that are out of the ordinary that can pique a listener’s interest and make a good lick very special. We hear a lot of basic pentatonic playing—and that’s great—but when an extra ingredient is thrown in it can add a lot.

This one could equally be called suggested notes or faint notes.

“The Thrill is Gone” is one of King’s most popular songs with aspiring guitarists. It begins with a guitar solo, it’s very melodic and the playing feels quite slow and reserved, and therefore quite accessible.

The truth is it’s rather difficult to play well because of some of the points already covered—beautiful phrasing, distinctive vibrato and microtonal bends.

But there’s another issue, too: If you play the song through headphones and turn it up loud(ish), you’ll hear these “throwaway notes.” Little turns of phrase, little afterthoughts to licks, hammer-ons when the sustain is almost gone, grace notes and approaches to licks that you just don’t hear on the first listen.

Again, there’s a point about B.B.’s style here, and a wider point too. If you’re emulating his style, be sure to include some of these suggested licks and throwaway moments.

The wider point is that there’s often hidden detail making something simplistic and beautiful sound and feel so alive. So you may need to look deeper and listen harder.

Here are some of the main ways in which B.B. King’s playing (and lots of great blues playing in general) interacts with and is inspired by vocal parts:

- Copying vocal melodies. This is a shortcut to memorable, melodic, tasteful and not overcooked solos.

-  Playing Between Vocal Lines. B.B. often played with singers, placing licks between their vocal lines, or even his own vocal lines. This in itself helps to teach phrasing and restraint.

-  Call & Response. A common technique in blues. This is effective, fun and helps you be to definite about phrasing and to develop a good ear (i.e., to know what to play to “respond” to the other’s “call”).

Alex Bruce is a writer for Guitartricks.com. GuitarTricks.com has over 11,000 lessons covering everything a beginner guitar needs to know to get started, as well as more complicated techniques like tapping, sweeping, scales, and more.