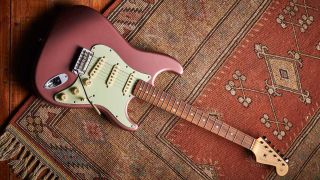 “When you’re setting up the trem [aka vibrato unit], I would get your guitar into tune first then tighten the screws [of the adjustable claw inside the cavity on the rear of the guitar that adjusts spring tension] until the underside of the bridge is just resting against the body - so you can touch the arm and it will move easily,” Matt explains.

“Then you keep methodically loosening the screws, adjusting them about a quarter- or a half-turn each time, both by the same amount - and retune your guitar after each adjustment.

“Keep doing that until the tremolo is in the position you want it to be in. Doing it in small adjustments is the key if you don’t want to get lost in an endless loop of adjusting and retuning.

“Another tip is to keep a running tally – on a piece of paper or on your phone – of how much you’ve adjusted the strings, so you can always take things back to where you started if you want to begin again.”

“The way I do it, and the way I recommend everybody should do it, is to start with the neck pickup,” Matt says. “Raise that up until you can start hearing what I call ‘wolf tones.'

“They happen when the pickup’s magnetic field starts interfering with the vibration of the strings. So either you’ll hear this wobble in the note or it will have no sustain - it will literally just sort of stop and your intonation will be all over the place. So find where that is and then drop the pickup just below until that goes away.

“That is the highest you could have that pickup. You could have it lower if you wanted. Depending on your gear setup and your taste, you might find that you prefer the sound of it a little bit lower, where it’s not putting so much signal out, letting the pickups ‘breathe’ a little bit more.

“Typically, the way I set the action - assuming a good all-round medium action is required - is to [adjust the saddle heights so the] top E string is about 1.5mm above the 12th fret,” says Matt. “And then you want to come gradually up with each string until the bass strings are set at about 2mm, so you’ve got this slight rake going on.

“And I find that more comfortable: it means that the strings can breathe properly and vibrate and that you can hit the bass side a little bit harder without them rattling, that kind of thing. You don’t really want to keep them all at the same height across the radius: they need to be at different heights to be at their optimum.

“If you’ve got a guitar with a small, vintage-style radius, however, you might want to have the treble side a bit higher than that. That’s the only time when I’d maybe go for around 2mm across the board. That’s just so you can bend the higher strings without them choking out.”