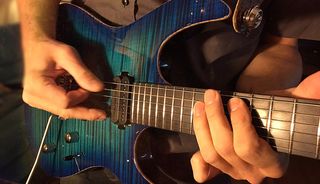 Hey, guys! Welcome back to the sixth installment of my current series, Absolute Fretboard Mastery!

Today we’re going to simplify and understand an extremely important part of music theory: chord progressions. Like all the knowledge areas we’ve covered so far in this series (See RELATED CONTENT to the left), I’m going to explain this in the simplest of terms so you can achieve a thorough understanding and absolute mastery of this concept. This will, in turn, help you as you get deeper into music theory and start applying this knowledge in your own music.

Let’s start by talking about what is referred to as the I IV V chord progression in the key of G major. I want to start off with this particular key because it’s very common and used in a lot of country and rock music.

Before we get too deep into the musical theory behind this, I want you to familiarize yourself with how these three chords sound together. Go ahead and start playing around with them in different orders, familiarizing your ear with how these progressions sound. For starters, we’re going to keep things simple and first learn the I IV V chords for the following keys:

Again, when learning these basic I IV V chord progressions in these five keys, I want you to play them together in various orders to familiarize yourself with what they sound like.

And if you’re ever in a situation where you’re asked to jam over an unknown piece of music, you’ll have a rough guideline on what to play. For example, if you know you’re jamming in G major, you’ll know you’ll most likely be playing a C and a D at some point.

Let’s start off with the VI chord, which often is used prolifically in any chord progression. If we take the key of G major, we have C and D, which are our IV and V chords. And then we have E minor, which is our VI chord.

Next, let’s consider the II and III chords, which are also minor. In the key of G major, the first six tones we have are G, A, B, C, D and E. So our II and III chords would be A minor and B minor.

When we move into keys like F major, we start to come across flats and sharps, which can complicate our learning process. This is why I want you to start off with these five basic keys of A, C, D, E and G.

The next thing I want to run you through is a little visualization technique involving your barre chords that will help you visualize these chord progressions across your fretboard.

So in effect, wherever your I chord is on the sixth string, your IV chord is underneath you on the next string and your V chord is simply two frets higher.

And if you ever need to play in an awkward key like A flat major (when you might not know the IV and V chords), by learning this visual pattern, you’d still be able to play in this key and figure out what your IV and V chords are after actually playing them. Next, let’s add the VI, II and III chords into this same visualization.

So if we were to go back to the key of G major, where our I IV and V chords are G, C and D, our VI chord, which is E minor, is simply two frets higher from the V chord.

Again, the only thing you’d need to play in a different key, say F major, for instance, is move this visual pattern to that position.

Once we put this all together, we end up with a box-shaped visualization that can help us figure out the I, II, III, IV, V and VI chords in any major key.

By memorizing this pattern and remembering that the I IV and V chords are always major and the II III and VI chords are always minor, we can pretty much play in any major key we want while learning the exact chords in the key after actually playing them.

The last thing I want you to do this month is to combine what we learned today with what we learned last week with the diatonic scales. Say we have a I (C), V (G), II (D minor), IV (F) chord progression in the key of C major that you want to solo over; you can meander over this chord progression using the C diatonic scale while paying attention to your phrasing and pausing, etc.

So as always practice hard and work on internalizing everything we’ve learned so far. This way, as we move through the lessons for the next few months and get deeper into chordal and scalelular theory, you’ll be able to draw on this understanding and make more sense of the more advanced bodies of knowledge.