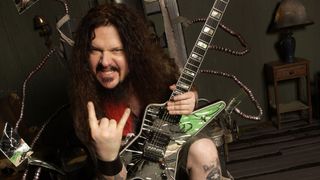 What's up, Daddy?! This month we're gonna talk about some ways you can dig yourself out of a playing rut.

Whenever you get into a rut, always try and remember these two things: One, you ain't the only dude that gets hit with this shit-we all go through it from time to time! And two, you're not always gonna be stuck there, so don't totally schiz out!

The only way that'll happen is if you let it. So, don't get bummed out and go "Fuck it, I quit!" That's a dumb-assed, loser attitude. Instead, get to work, man. If you wanna get out of a rut bad enough, it'll always happen. It's up to you, though. No one else is ever gonna do it for you.

When you find yourself doing the same old things over and over, logic says that the best way out is first, to take a real close look at what you're playing. Then find out what you keep repeating and say, "OK, I won't do that any more." At that point, stop doing it and try something else instead!

I'm not saying you should give up on all your old licks. Just let them rest, and make it your goal to try new things and grow. If you make a definite effort to do this, it'll lead to new ideas and a way out of that rut. Here's some other things that might help you out...

My dad's a great guitarist, and he said something to me when I was learning to play that I've always remembered.

One day I was stompin' around the house, all pissed-off because my playing was in a bit of a rut. And he said, "Well, son, if you decided to learn just one new lick a day, how many would you have at the end of the year?" Think about it, man, the possibilities right there are staggering! Shit, if only I knew a lick for each beer I've had, I can't even imagine how much extra knowledge I'd have!

The importance of others

To me, a surefire way to get in a rut is by sitting around playing by yourself for too long. You've gotta get out there and jam, man! You don't have to necessarily be in a band, all you've gotta have are a couple of buds who play too. They don't have to be guitarists either; jamming with a bassist or a drummer is cool. I was real lucky to grow up with a brother that kicks ass on drums [Vinnie Paul, Pantera's skinsman extraordinaire, is D.D.'s bro.-GW Ed.].

We used to play together all the time, and doing that really helped me develop as a guitarist in a BIG way. Jamming with other people will create energy and excitement that you can feed off, and which will help push you to do things you'd never dream of doing by yourself.

I love jamming with my band because the guys inspire me every time. We all get off on each other's playing. Also, whenever I do something that one of 'em likes he'll say something like, "Hey dude, that one note was bad-assed!" Hearing that sort of thing definitely boosts your self-confidence, man! If you play something great in your bedroom no one's ever gonna say shit about it, because no one else heard it!

Be yourself, by yourself

If you have no buds to jam with, you can always record a rhythm part yourself and then wail lead over it. I used to do that all the time. You don't need to do a whole production deal with a four-track and a drum machine either; all you need is a boom box with a built-in condenser mic and you're set. Don't always solo over the same sort of stuff, though, or you could fall into a rut.

Whenever I would get tired of soloing over heavy riffs in E, I'd come up with a rhythm part that was in a different key and had a completely different feel to it. Then I'd record it and let it take my lead work to a new place. Sometimes a change of mood and pace can help you find fresh ideas, and this is one way of doing that.

The laid-back, bluesy, B minor rhythm shown in [FIGURE 1] is a good example of what I'm talking about here.

Finally, even when you find yourself trapped in the deepest rut you've ever known, don't ever forget just how fuckin' good the guitar sounds. Sometimes, because you've been playing so much, it's real easy to take the thing for granted. Never let this happen, Dad! The next time you think: "Oh shit, this sucks," slow down a little bit, take a step back and then take a closer look at things.

Whenever I get down on my playing I just bend a note, shake it and listen! What I hear sounds so great that it makes me realize that even a rut doesn't suck! The guitar is a killer-sounding instrument, man. That's why we play it! The next time you're in a rut, just think of me. You'll be out in no time.