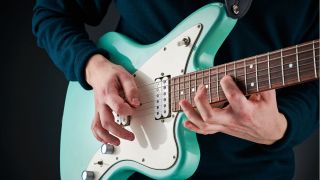 Just like strumming, alternate picking has down- and upstrokes at its core. Unlike strumming, this is more of a lead guitar technique, so we’re talking mainly about playing one string at a time.

Okay, this might not sound overly exciting but bear with us. How you pick massively affects your playing; get it right and your solos will soar!

In truth, it’s much like strumming – synchronise your downstrokes with the musical pulse and place your upstrokes in between. Follow our exercises to see improvements in both speed and timing

Here we have two different six-note patterns on the middle two strings, each played with a sequence of alternating down- and upstrokes. Notice how the second grouping begins on an upstroke.

This Zakk Wylde-style lick has a two-note-per-string picking pattern. It’s quicker than the previous lick but each grouping begins on a downstroke, which can make it feel more natural.

This bluegrass-style lick will have you moving about from string to string – quite the challenge when you’re using strict alternate picking. Practice slowly and learn four or eight notes at a time, keeping your pick moving ‘down-up’ throughout.

Try flicking your pick away from the strings on the upstrokes to lessen the chance of hitting the wrong string on the downstroke.

Move onto 90-120 BPM. Now, the middle tempos are important. You should start to ‘feel’ the music now.

Finally, play it at 120-150 BPM. When you are alternate picking cleanly at this tempo, well, let's just say we're envious!