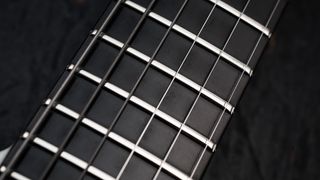 The one thing tabs lack, though, is representation of rhythm. However accessible they are, you have to learn rhythmically how to articulate the represented notes by other means.

Studying notation can run very deep, with ties, dotted notes, triplets and many more elements meaning there is a great deal to study on the subject. The purpose of this article is to give guitarists a very basic overview of understanding and reading the basics of rhythm notation.

Once you get to grips with the below, or indeed if you already understand it, then go ahead and look into the subject in more detail.

The whole note (essentially just a circle) is so called because it fills the whole of a bar of 4/4 time - the most common time signature in western music. As such, it lasts for four beats.

There shouldn’t be too much difficulty practicing and playing whole notes as they fill the entire bar. So there isn’t much that can go wrong. The important thing is to be aware of what they are, how long they last, and how they’re played.

Practice playing whole notes by simply setting a metronome, then playing notes or chords, ensuring each lasts for a whole 4 beats.

Clearly, a pattern is emerging. The half note lasts for half a bar and therefore, discussing 4/4 time as we are, it lasts for two beats. The whole note described above can be subdivided into two half notes, i.e. in the time you can play a whole note, you can fit two half notes.

As you can see above, the half note is an empty circle with a stem.

The only real rhythmic variations involving half notes occur if the bar in question is not simply divided into two half notes. There is a little more to think about if it is divided up differently, For example a half notes followed by two crotchets or by four quavers (see below for more on what this means).

Again, as this is just an introductory overview, take note of this note’s name, appearance, length and function. Begin to look out for it in whatever notated music you can find.

Practice playing half notes by setting a metronome, then fitting 2 equal notes per bar, 2 beats each.

The quarter note is so called because it lasts one beat - a quarter of a bar of 4/4 time. This means, therefore, that you are able to fit four of them into one bar. You may have heard the term 'four to the floor' - meaning when a drummer plays the kick drum on every beat, i.e. four quarter notes per bar.

As above, these notes can be combined with notes of other lengths to create various rhythms, so make sure you take on board what a quarter note looks and sounds like and how long it lasts so that you’re equipped to interpret and play any basic rhythm you may come across.

It’s a good idea to look at notation for a song you already know and pick out what you can see from the rhythmic notation, using the fact you already know this song well to further your understanding of the notation and vice versa.

1/8 of a bar or half a beat long, the eighth note is half of a quarter note. This means a quarter note can be subdivided into 2 half notes. You can see this in practice quite easily by doing the following exercise:

The reason why two images are shown here is that when multiple eighth notes occur in sequence, they can be ‘beamed’ i.e. joined by the horizontal bar shown. So you may see them in either of the visual forms above. Either way they’re eighth notes, and either way they last half a beat.

Practice eighth notes by setting your metronome and playing not only on every beat in the bar, but on every ‘off-beat’ too (i.e. the spaces between the beats). Take care, because the eighth note is the first point at which not everything you play will be ‘on the beat’.

As mentioned above, there is a whole world of rhythm notation out there beyond the contents of this article, but ensure you’ve fully absorbed and internalized the above before moving on.

Not only as these are the basics, but also because - as you can see from the way the above information has played out - very often with notation, rhythm and all music theory, each thing you learn kind of depends on your previous knowledge of the thing.

Alex Bruce is a writer for GuitarTricks.com