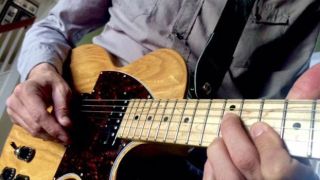 Hello, my name is Matt Blake, and I teach guitar classes at Wells Station Elementary School in Memphis, Tennessee.

In this column, I’d like to share with you a useful lesson that I teach my students, and that is the importance of rests, or silence, in music, and how to achieve it in a meaningful, controlled manner. I do this by teaching them some basic, stock jazz “riffs” that are both fun to play and beneficial for their general technique development.

Music may be defined simply as “organized sound and silence.” Too often, people tend to overlook the “organized” and “silence” parts. Good phrasing in music comes from the skillful control of just that.

On the guitar, it’s not enough to set the strings in motion to create sound and just let the silence fall haphazardly or merely through its interruption by the next sound. You have to purposefully initiate the silence, just as you do the sound. To do this on the guitar, we mute the strings, using either or both hands. In this lesson, I’d like to focus on fret-hand muting and how it can be used to clean up your sound and improve your phrasing.

This basic action is the focus of FIGURE 1. Blocking out chords on each beat, it is akin to what is known in jazz as “flat-four”-style chord playing (an approach popularized by guitarist Freddie Green with the legendary Count Basie Band). Notice the staccato markings (the tiny black dots below the notes). After strumming each chord, loosen your grip on the strings just enough to “choke” the chord so that it stops ringing. It should sound like “jump, jump, jump, jump;” rather than “joe, joe, joe, joe.”

You may find it helpful at first to isolate the fret hand and play the exercise as if the neck were a keyboard, repeatedly hammering-on the chord shapes without strumming, then quickly releasing the downward pressure against the strings. The movement should be minimal, and, again, the fingers should not break contact with the strings. Once this feels natural and easy, add the pick-hand strums.

Adding an element of syncopation — when sound between the beats is emphasized — FIGURE 2 makes use of a rhythmic figure popularized by the Benny Golson jazz standard “Killer Joe.” A good way to practice this example is to set your metronome at half the prescribed tempo — 70 beats per minute (bpm) instead of 140 — and have the clicks represent beats two and four. This is a great way to develop a more natural jazz feel. Again, spend some time practicing this with just the fret hand to allow you to really observe and focus on your muting technique. It’s really more about coordination than finger strength.

When tackling our next and final example, “Salamander” (FIGURE 3), work out the rhythm first, as there is a fair amount of syncopation (There are pick strokes in the notation to guide you). Set the metronome as indicated and tap out (on a table or your knee), or speak the rhythms at first before playing them on the guitar.

Once you get the sound of the rhythm in your mind’s ear, try playing the chords with your fret hand only, then add the pick hand. (The Bfm7 chord is best fretted with your middle finger on the low E string and your ring finger barring across the D, G and B strings.) If the chord changes are tripping you up, play the whole figure using a single chord at first until you acquire the muscle memory to grab the chord shapes fairly quickly. Take note that on beat four of bar 3, your fret-hand fingers should be muting the chord, not lying flat across the strings.

After working through these musical exercises, you should find that your control of fret-hand muting feels more secure and natural. Try applying this useful technique to your own rhythm guitar playing. Hopefully, you’ll soon hear a noticeable improvement in your phrasing and ease of expressiveness. Happy muting!

The VH1 Save The Music Foundation is a nonprofit organization dedicated to restoring instrumental music education programs in America¹s public schools, and raising awareness about the importance of music as part of each child's complete education. Get involved at vh1savethemusic.org.