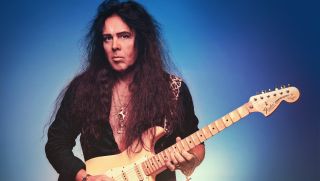 Here's a classic Guitar World lesson for you. Enjoy!

Of all my musical influences, classical violinist Niccolo Paganini has to be on top of the list.

Though he lived in the late 18th century (long before image became as important in the making and marketing of musicians as their actual music), his extreme personal magnetism coupled with truly mind-boggling technique made him the world’s first bona fide rock star.

Paganini was born in 1782 in Genoa, Italy, and by the time he was 20 he was the most famous violinist of his day. He mesmerized audiences and critics alike with his charismatic stage presence, otherworldly chops and flamboyant showmanship.

Apart from his unparalleled technical wizardry on the instrument, Paganini is remembered for his artistic impact on later composers such as Liszt and Chopin, who used his virtuosity as a technical challenge in the search for greater expression in their own works.

Apart from his obvious musical and technical brilliance, Paganini proved to me that a great musician doesn’t have to sacrifice virtuosity for showmanship. As a result, I’ve always strived to make my shows as visually exciting as possible without compromising my musical integrity.

Paganini’s compositions also influenced me deeply—especially his 24 Caprices Op.1. I remember learning the Fifth Caprice in A minor—I’d practice it incessantly until I got it wired. It not only really helped me with my technique (particularly arpeggios), but opened my ears to harmony and melody.

I learned the Fifth Caprice by listening to a recording of it. Because I didn’t have the sheet music, it was a long and painstaking process to pick up the melody by ear, but it was definitely worth it.

I think that any guitarist can benefit from learning Paganini’s Caprices. To that end, I’ve written out the first 20 bars of his Fifth Caprice in A minor in FIGURE 1. I have to warn you—this piece is not for the timid—you have to be very patient and put a lot of time in, but the results are well worth the effort.

Pay special attention to all the arpeggios, and work out your right-hand picking accordingly.

I’d use a combination alternate/sweep picking approach to play the F#dim7 arpeggio in measure 14.

When playing the descending chromatic scale in measure 16, make sure to execute all the picked slides with your index finger. I hope you benefit as much from learning this Caprice as I did.