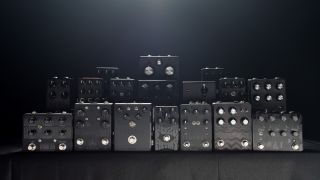 Just yesterday, we reported on a mysterious Instagram social media campaign centered around the hashtag #blackedxout, which has been shared by a variety of boutique effects pedal makers.

Well, now we have the answer, as Reverb has announced the Blacked Out shop, which features 19 pedals from 17 companies, released in limited-edition, never-before-seen 'Blacked Out' finishes.

The shop features just 100 or less of each pedal, representing either a best-seller or a fresh release from each brand.

Among the highlights is Meris’ first-ever exclusive variant release, a limited edition Blacked Out version of its Mercury 7 Reverb, the pedal inspired by the 1982 Bladerunner soundtrack.

The remainder of the Blacked Out lineup is as follows:

Only 100 or less of each limited edition pedal will be made available in the Blacked Out shop. To get back in black, head over to Reverb.