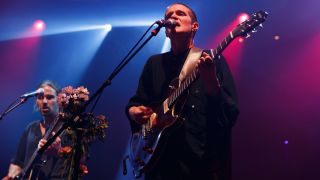 Each week at Guitar World, starting today, we're setting out to bring you a handful of fresh guitar tracks you need to hear, spread across a range of genres. What they'll all have in common is a host of six-string moments that continue to prove that - contrary to popular opinion - the guitar is very much alive and well in a wide variety of musical contexts.

This week, we're offering up everything from a teeth-baring epic from indie stalwarts Big Thief to 5 Seconds of Summer's unlikely collaboration with a six-string legend.

Adrianne Lenker has, for my money, spent the last 12 months or so on one of the millennium's more remarkable songwriting hot streaks. The haunting, bare-bones folk of her 2018 solo album, Abysskiss, was a revelation. On U.F.O.F. - the early 2019 album from her band Big Thief - Lenker's vivid lyricism kept the band's restless musical explorations tethered firmly to a powerful emotional core. The band's new single, Not, is its own beast entirely though.

Propelled forth from its opening seconds by Buck Meek's jagged rhythm work and Lenker's raw, first-take vocals, Not abandons the dizzyingly beautiful sonic landscapes of U.F.O.F. entirely. What puts it completely over the top though - towering over anything else in the band's already-formidable catalog - is Lenker's song-closing, three-minute solo. A tour de force of Nineties-evoking feedback and gnarled shredding, it's the sort of performance that'll remind you of what drew you to rock guitar in the first place.

Black Stone Cherry - Me and the Devil Blues

Kentucky’s favorite blues-rock sons return with an electrified and reworked version of the Robert Johnson classic. Essentially, it’s the legendary bluesman’s lyrics over a completely new BSC jam – which, according to the band, was worked up on the spot in the studio. Which means we get a loose, energized and expansive romp, with plenty of space in the arrangement for solos and slide work. Me and the Devil Blues is the first release from the band’s upcoming covers EP, Back to Blues Volume 2 – here’s looking forward to what they’ll do to Son House, Otis Rush, Elmore James and the remainder of the bluesmen tackled on the effort.

Australian pop-rockers 5 Seconds of Summer and Tom Morello - former axeman for rap-metal rabble rousers Rage Against the Machine and Audioslave - might not be the most obvious pairing on paper, but the end result of their collaboration is surprisingly fresh. Led by a snaking bassline and complemented by a fuzzed-up guitar counterpart, Teeth sees Morello lending his trademark Whammy stabs and toggle-switching technique to overdubs peppered throughout the track.

We’re not quite sure how the collaboration came to pass, but sonically, the resultant track wouldn’t sound out of place on any Muse record from the past two years.

The 1975 have always been a band capable of plenty of sonic shapeshifting, but we’ve never witnessed them quite like this. Much has been made of singer Matt Healy’s Manson-esque distorto-vocals and, in the official People video, goth-glam persona on this track, which is scheduled to appear on the 1975’s upcoming fourth album, Notes on a Conditional Form. But the real hook here is Adam Hann’s alternately spiky and caterwauling guitar lines, which slash through the motoric rhythm with post-punky precision.

Looking for sheer guitar-shred overload? Look no further. The second single to be released from DragonForce’s upcoming Extreme Power Metal is, well, just that. Which, of course, is exactly what we have come to expect (demand?) from the band – although this time they at least throw us a little bit of a curveball, injecting the verses with an almost power-ballad-y lilt. Not your thing? Well then, please skip to roughly four minutes in and behold the glorious shred, replete with tapping, whammy bars, dual harmony guitars and, um, hacksaws?