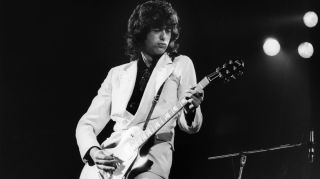 A previously unheard 1973 Rolling Stones track, featuring Led Zeppelin's Jimmy Page on guitar, has been unearthed, it was announced today.

The song, Scarlet, was recorded during the sessions for the band's 1973 album, Goats Head Soup, and will be included in the upcoming multi-format, remastered reissue of that album. In addition to Page, it also features Blind Faith's Rick Grech on bass.

Sadly, Scarlet has not been premiered yet, but another previously unheard cut from the sessions, Criss Cross, can be heard below.

Scarlet is not the only time Page and the Stones have teamed up on record. Page played lead guitar on the 1986 track One Hit (to the Body), a cut from the Stones' Dirty Work album that became a Top 40 hit in the United States.

The Goats Head Soup reissue, featuring Scarlet, Criss Cross and a third previously unheard track, All The Rage, will be available via Universal Music on September 4.

Fans can preorder it at The Rolling Stones' website.