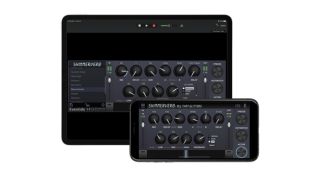 Eventide has announced the ShimmerVerb plugin, which combines a “lustrous reverb with parallel pitch shifters to add ethereal layers, making any signal ‘shimmer.’ ”

The plugin, which approximates the type of sound that producers Daniel Lanois and Brian Eno achieved on U2’s iconic The Unforgettable Fire album, has been extended with a unified interface that allows for adding ambiance to guitars, keys, synths, samples and vocals.

Features include the ability to infinitely feedback the signal, resulting in “cascading reverbs that smear into oblivion.” Additionally, users can specify which frequencies are fed back through the low/mid/high cross-over network.

There’s also MicroPitch tuning available around perfect intervals, four octaves of pitch shifting (from two down to two up), a Ribbon option that allows for real-time modification of several parameters at once and a Hotswitch control for instant switching between two sets of parameters within one preset.

ShimmerVerb is available for Mac and PC and supports VST, AAX and AU plugin protocols for compatibility with every DAW.

The plugin is available at an introductory price of $39 through September 8, with a regular MSRP of $99.

The iOS version of ShimmerVerb, which works as a standalone app, AudioUnit v3 plug-in or Inter-App Audio effect, is offered for $14.99.

For more information, head to Eventide.