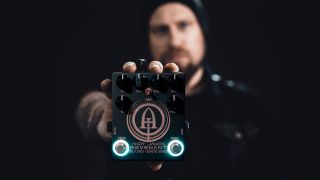 Now, STL has unveiled its newest creation with James, as well as the company’s first-ever hardware product, the Revenant effect pedal.

Designed in conjunction with James and Ignite Amps, the new unit is a high-gain preamp that offers tube-like tone and response via reliable solid-state circuitry.

The Revenant boasts controls for gain and volume along with a four-knob EQ (bass, low mids, high mids and treble).

There’s also a shape toggle to choose between modern and vintage response, as well as a focus footswitch that boosts the signal with additional gain, tightness and compression.

Said James of the Revenant, "It’s so responsive, even when you turn the guitar down, just the sort of thing you would expect a valve amp to do.

"It’s got that perfect tone, super crisp and smooth with the picking, even on single notes. For me it’s just that perfect response I want to get out of a pedal like this.”

For those who prefer their hardware to be, um, software, the Revenant is also available as a digital emulation in the Tonality: Andy James plugin suite.

But for those who would prefer to do some physical stomping, the Revenant pedal is available for pre-order at STL Tones for $299.99.