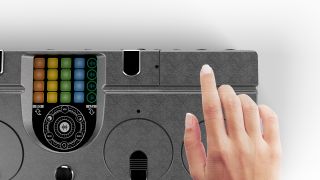 Audibotics has unveiled PlayX, which the company is touting as the “first and only smart audio platform.”

The new offering can be utilized as, well, almost anything, from a guitar and bass effects processor or a pedalboard in front of an amp (with upwards of 150 effects available via free PlayX apps), an ambient effect in an amp’s return loop to an analog boost audio interface and controller in a DAW plugin setup.

PlayX can also be run as a four-analog channel mixer, incorporating vocal, acoustic instruments, rhythm, MIDI, synth and samples, or as a media player to record, playback, remaster or just listen to music.

There’s also drum machines, amp sims, two- and four-channel loopers, a sequencer, a built-in DJ, a guitar “teacher” and much, much more.

PlayX is a fully mobile and wireless device, and can be controlled via hand or foot operation.

There’s no word on price yet, but for more information – and there’s a lot of it – head over to Audibotics.